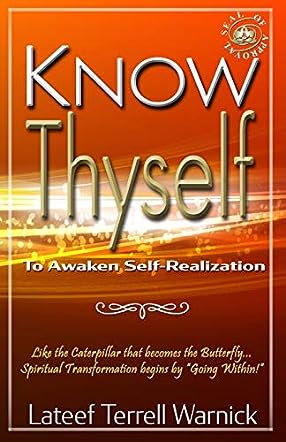 Know Thyself: To Awaken Self-Realization by Lateef Terrell Warnick takes ideals from Eastern as well as Western thoughts to dwell deeply on the aim of life. It finds five states of consciousness, called koshas, for each atom and specifies them as Annamaya Kosha pertaining to inanimate life, followed by Pranamaya, Manomaya, Jnanamaya and Anandmaya Kosha pertaining to plant, animal, angelic and blissful forms of life respectively. Other esoteric topics like origin and reach of religion, reconciling religion with science, purpose of life, as well as what is sin, are then examined. The book concludes with an exhortation: Soul is Spirit; Spirit is Soul! This is God’s Sole Revelation… I AM, hence, Know Thyself!

Know Thyself: To Awaken Self-Realization by Lateef Terrell Warnick is not an easy read. Even for a book written on philosophical topics, this is a hard one, since the discussions necessarily involve the comparatively obscure, deeper tenets of the East as well as the West. However, the author has made efforts to marry the potent, sublime ideas of Eastern thought, like the Seven Chakras, Brahmacharya, Isvarapranidhana etc, with relevant areas of Western thought and the Holy Bible. A set of review questions appropriate for each chapter would have been a great help, more so for such a topic as this. This book is highly educative, it can clear up a good many questions on the spiritual front and can elucidate one's notions about one of the most volatile topics these days, religion and its observances.

Very thought-provoking book that stays with you long after you've put it down. It will lead you to ponder and examine your own beliefs. This is a book you will find yourself revisiting as you begin to crystallize your own thoughts, how you approach life and find your happiness within. Definitely recommend...