A Perfect Storm of Injustice

by Jack A. Saarela Toward a Model of Constitutions From Tibet to Egypt

by Jeremiah A. Gilbert 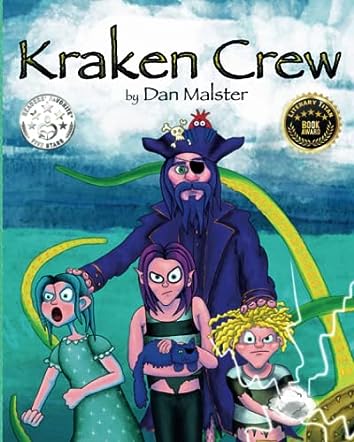 Dan Malster lives aboard the Kraken on the winding inland waterways of the UK. In between raising a motley crew, having adventures, refurbishing his ship (the Kraken) and looking after mother nature in his part time land-lubber job, Dan has found time to start a new adventure in writing and illustrating.

As a child Dan spent half his life drawing, when not having adventures in the woods or on the banks of the Thames that is. As he grew he developed a love for all things creative and spent his time drawing, painting, printing, making models and puppets, carving wood, making silver jewellery, welding steel, DJing and eventually refurbishing boats.

It wasn't until he had children of his own that he got hooked on storytelling. Dan and his three children would take it in turn to make up stories on rainy days, on long bus or train journeys, and at bedtime. His first book, Kraken Crew, was developed from one of the all time favourite stories that Dan told to his children. With a simple goal of writing and illustrating books for children that are funny and adventurous, he has plans for many more books to follow Kraken Crew, and has already made a start on the prequal, Release the Kraken.

Kraken Crew by Dan Malster is a children's fantasy picture book for young readers who are up for a tale far different than the standard bedtime story. The book begins with an introduction to a ship full of marauding anti-heroes who, by appearance, are all quite young themselves except the aged Captain in a pirate hat and twisted violet beard. The mission? Stealing gold from dragons, of course! Each has their role to play on the voyage, from the Banshee fending off siren songs to Storm boy and the elf-witch, who make a ghost ship disappear and know how to handle the creature who emerges from bubbles that are not a ship's fart. But it is the summoning of the Captain that steals the show and an unlikely ally that saves them all.

In the interest of full disclosure, I am a bit of a goth mom. So books with a bit of creative witchy 'magick' and actual monsters ripping through the pages will not scare off my little reader. A genuine bedtime squirm is fun for us but consider yourself warned. I loved every inch of Dan Malster's artistry and storytelling in Kraken Crew. Jewel-toned creatures and children who look like they haven't showered in a year—yes, please. Lyrical sing-song style narratives with potty humor and a Mount Doom with charred bodies and the skeletons of unsuccessful dead pirates—again, yes. The ultimate glory of a crew that fights back against the evils of the sea through teamwork, creative thinking, and assistance from those they've assisted before? Five stars and another read tomorrow night. We love Kraken Crew!

Kraken Crew by Dan Malster is an illustrated children’s picture book about a captain and his crew aboard the vessel Kraken. Their goal is to reach Mount Doom, where it is rumored they will find a vast treasure. But challenges abound with sirens, ghosts, sea monsters, and the like, all ready to spoil their adventure. Can the crew make it to Mount Doom, or will they sink and perish along the way?

The text is set in a rhyming format which summarizes much of the story in a way that works for this kind of story. After all, who wants a bunch of words covering colorful pictures like these? The artwork is silly and fun, detailed and colorful. Each of the characters plays an important role in helping to save the crew. Each of them has special abilities and steps forward at the proper time to repel the enemies that come their way. The children appear to be between 8 and 12 years of age, so those readers can readily identify with the characters, perhaps even imagining themselves to be the one who saves the crew and earns the coveted gold star. Adventure stories such as this are fun to read, capturing young readers’ imaginations who love far-off tales of excitement and piracy, with added humor on every page. Kraken Crew by Dan Malster helps to teach readers about teamwork and how even the impossible can be achieved. A recommended read.

Kraken is a pirate ship that seeks treasures beyond the great seas. It has a crew full of an unusual assortment of characters, including an animal charmer witch, a supersonic scream-killing banshee, and many others whose special talents help protect, guide, and even save the ship from danger. Their current destination is Mount Doom, populated by some fierce dragons. This motley crew is determined to steal the dragon’s gold and make themselves rich for the rest of their lives. But, they have to confront the dragons and face all kinds of peril and dangers first. Getting rich is not as easy as one might expect. Oh, and watch out for the parrot who stands guard. His bravery is not the greatest, and he has difficulty distinguishing what’s what and who’s who. But at least he’s on guard.

Dan Malster’s picture book story, Kraken Crew, is fun and adventure rolled into one engaging book. Told in rhyming verse, the lyricism will have young readers enthralled and wanting to read more. With the motley assortment of characters, there is bound to be some humor, and this comic relief leads the reader through the more gruesome aspects of the tale. The plot moves quickly, following the Kraken pirate ship and its crew to the dangerous island ruled by dragons. While the menagerie of different talents aboard this ship should be enough to protect both ship and crew, the crew has to learn how to work together to make their talents affect the danger they face. Each new danger highlights one crew member’s talents, but when they reach the ultimate danger, the dragons, they must learn to work together to not only succeed but to survive. A powerful lesson that we all need to learn. The boldly colorful illustrations add extra comic and dramatic effect to the growing adventure. A great read, one that will have young readers laughing one minute and cheering on the crew the next.

“A smooth sea never made a skilled pirate.” Kraken Crew is a delightful children’s picture book by Dan Malster. The fearless Kraken Crew is sailing to Danger Creek for the most daring adventure of a lifetime. They’re going to steal the gold from dragons who live on Mount Doom. While sailing, a ghost pirate ship chases them. The Kraken Crew is scared of losing their heads. Quick-thinking Storm Boy summons lightning, thunder, and a heavy gust of wind that blows the ghost pirates away. The grateful captain rewards him with a star for saving them. Then Parrot thought the ship had farted, but an enormous sea serpent appears, with one thing on its mind, Luckily, the elf-witch knew what to do. This adventure is filled with danger, but every member of the Kraken crew has a special talent. Will these talents be useful or effective if they make it to Mount Doom to steal the gold?

“To Err is human, to Arr is pirate.” Kraken Crew is a delightful children’s picture book by Dan Malster. He has written an entertaining story in a poem. The rhyming rhythm is very lively with a strong word structure that shows great visuals, even if it hadn’t included these beautiful illustrations. I also like the font style used. Children will adore this pirate adventure and every member of the Kraken Crew. They will also learn from reading this book that everyone is different and we all have our own special talents. The Kraken Crew by Dan Malster is a fun picture book to read.

Kraken Crew is an adorable picture book penned for young readers by author Dan Malster. This charming story takes readers to the high seas as we join a band of pirates on their way to Mount Doom, where they intend to steal a bounty of gold from some extremely dangerous dragons. We are introduced to a magical crew with a variety of interesting talents so that we can rest assured these characters are the best pirates for the job. So when everything goes very far from ship-shape as the crew approaches the mountain, a tense adventure to safety and riches commences. Will the crew succeed?

Author Dan Malster creates just the right balance of tension and excitement to keep young readers hooked on this fabulous picture book without ever making the events too frightening or too overwhelming. The illustrations in the work are beautifully vibrant and cartoony, bringing characters to life in a modern animation style that kids of today will instantly click with. I enjoyed the rhyme scheme of the tale, which helps move the plot along at a fast pace and keeps a jolly sing-song attitude in the scarier scenes with the dragons and dangerous waters. The cast of characters was also larger than life, and I loved their introductions, each getting their own moment to shine in the plot. For such a concise picture book, the story packs a lot in and will surely become an adventure that kids want to return to again and again. Overall, Kraken Crew comes highly recommended.