Lady Justice and the Cat 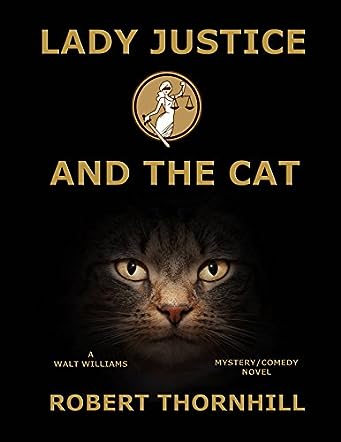 Award-winning author, Robert Thornhill, began writing at the age of 66 after a 36 year career in real estate. In seven years, he has published 26 novels in the Lady Justice series, the seven volume Rainbow Road series of chapter books for children, a cookbook and a mini-autobiography.
Nine of the Lady Justice novels received the Pinnacle Achievement Award from the National Association of Book Entrepreneurs for best new mystery novel, sixteen have received 5 Star Reviews from Reader’s Favorite, and nine have been ranked #1 on Amazon in the past twelve months
Many of Walt’s adventures in the Lady Justice series are anecdotal and based on Robert’s real life.
Although Robert holds a master’s in psychology, he has never taken a course in writing and has never learned to type. All 37 of his published books were typed with one finger and a thumb.
He lives with his wife, Peg, in Independence, Missouri.

In November 1971, D.B. Cooper hijacked a plane and then jumped with the loot of $200,000 he secured in the trade for the safety of the passengers. He was never seen or heard from again. The bills had been marked to facilitate tracing, but they never surfaced. So what happened to the loot? And why, forty years later, were so many people so intent on finding the murderer of a certain Byron Forsythe, who, it was believed, had recovered the treasure. Or had he? He never lived to enjoy the loot, as fortune hunters were quick on his trail. Even Forsythe’s cat, Clarence, was suspected of hiding something that might lead to the Cooper treasure.

Enter Private Investigator Walt Williams, whose wife, Maggie, just happened to be the real estate agent assigned to fix up the Forsythe house and make it presentable to potential buyers. The cat attaches itself to Maggie and the adventure begins. As the treasure hunters search for clues, the search leads to the cat and tidbits of humor intersect with the mystery as Clarence manages to escape time and time again. The mystery thickens into a terrorist plot and, with each new tangent, Clarence is front and center and part of the action.

Robert Thornhill’s mystery novel, Lady Justice and the Cat, will certainly thrill both the avid mystery reader and cat lovers. The plot develops with lots of fast action, page turning thrills, and excitement. The characters are well presented and quite realistic. The climax is a bit vague, as the D.B. Cooper mystery, which is never fully resolved, actually evolves into another dramatic thriller as the terrorists take an interest, albeit indirectly, in Clarence. Overall, however, a good read.