Lake On The Moon 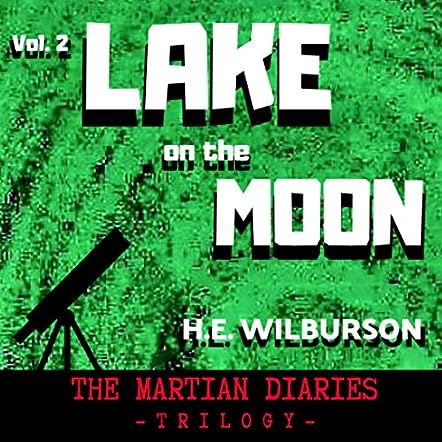 In late 2015, H.E.Wilburson (or H.E. as he likes to be called) was surprised to find himself writing a sequel to The War Of The Worlds, as his first love is actually composing and painting pictures with music. An unexpected birthday gift of a first edition copy of the classic science fiction book sparked a long held fascination with the science fiction story by H.G.Wells. Inspired by the many adaptations of the novel over the years, H.E. began to create his own faithful continuation of the plot, imagining the onward lives of the original characters and what might happen if the Martians returned to Earth wanting revenge for their first, failed invasion. With over 800 musical compositions filed away over the years, H.E decided to showcase some of them in his story, to add atmosphere and mood, and The Martian Diaries Trilogy took shape as an audiodrama, or movie for the ears. Born in Wales, he has lived most of his life in the south of England apart from a few years in the glorious mountain country near Lake Louise in Canada. He retains a love of mountains and the first volume of his trilogy features the mountains of Snowdonia in Wales, where an unopened Martian cylinder from the first invasion is unexpectedly discovered.

The Martians have landed and are wreaking havoc in England, and one of their victims believes he may know the key to their existence in the enthralling science-fiction novel, Lake On The Moon (Volume 2 of The Martian Diaries Trilogy) by H. E. Wilburson. When the Martians land in England in 1906, Ogilvy, an astronomer, is severely burned by one of their heat-rays. While Ogilvy lies in the hospital, a planetary war is raging outside. Meanwhile, the Martians have released invasive red vines that are swiftly covering everything. When the red vines invade the hospital, killing the inhabitants, Ogilvy feels he has nothing to lose, so he fights back. Taking a bite out of a vine, Ogilvy is shocked by the consequences of his action. The plant pervades his body and exits his orifices. Barely surviving the incident, Ogilvy learns a valuable secret about his enemies. The clue to their extermination could very well be hidden in the essence of the voracious red weed. Unfortunately, his attempt to have it analyzed is hindered. The Martians have left earth, and the red weed died with their exit. Ogilvy knows he holds crucial information that could save the world, but without the dreaded red weed, he is impotent. What does the future hold for the population of the planet? Can Ogilvy find a remedy to restore the earth to its previous state?

The narration for Lake On The Moon by H. E. Wilburson is fabulous! The soundtrack and sound effects create an intense and enthralling background for the storyline. Terry Thompson and Harry Preston are magnificent narrators and actors. Their portrayals gave depth and realism to the characters, making them genuine and relatable. Lake On The Moon is a sensational accompaniment to H. G. Wells's War of the Worlds. It carries the same dark and intense aura as well as the same intriguing characters. I was immediately caught by the imagery of the setting and couldn't stop listening until the tale came to its riveting conclusion. The storyline is mesmerizing, and Mr. Wilburson has done a magnificent job of melding his story with the original War of the Worlds. Although this is a phenomenal story, there is one drawback, it is the second in the series. Without reading or hearing the first book, it can be slightly confusing. Despite that fact, the incredible intricacies and thought-provoking strategies created by Ogilvy, George, and the Major are clever and ingenious. I highly recommend it to those who are H. G. Wells fans; they will not be disappointed!