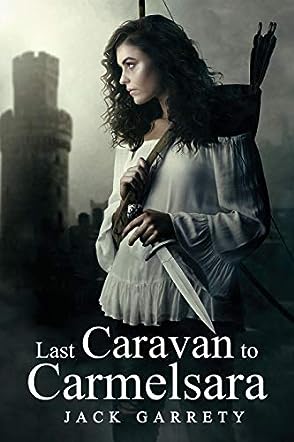 Jack Garrety’s Last Caravan to Carmelsara opens in Roganshah, a city of the faltering Commonwealth, filled with refugees awaiting the final onslaught of Queen Shayla’s conquering army. Enter Deva and Neha, two wandering yet capable women; Caleb, a disgraced army commander; and Mohar, a thief with mismatched boots. Throw in Hawke, a wily caravan master; Chea, a smiling orphan; eight soldiers; 500 people desperate to escape, and magic, and we have an adventure. Their destination is Carmelsara, the home of the “Torian”, the dying emperor of the Commonwealth, but the road there crosses a desolate plain, home to a ferocious tribe of half-human slave takers, the Nuttal. But, as if avoiding the clutches of the Nuttal is not trial enough, unexplained murders are beginning to occur among the travelers, murders which could decide the Commonwealth’s continued existence.

Last Caravan to Carmelsara is typical fantasy in that it transports us to another place and time. Jack Garrety writes tautly and not over lavishly, his narrator’s voice sure. The book’s pace carries us along, forcing us, willingly, to keep reading. Happily, there is no information dump to distract us from the story. We are given just enough background, delivered mainly by the characters themselves, to gain a sense of the world’s history. The characters themselves are nicely flawed, and much more than they seem. Their common motivation, to arrive safely in Carmelsara, is often at odds with their own personal agendas. This book was a joy to read. It reminded me of books I read in my youth and now very much miss. The author has a talent for creating a fast-paced story, and the world-building is not suffocating as is the tendency with some "popular" fantasy series these days. This is an entertaining, imaginative, and well-written tale with romance, intrigue, and magical deeds, and I cannot wait for the sequel.