My Time With Glenn Frey, The Eagles, and Other Hit Artists
by Sebastian Jaymes
Non-Fiction - Memoir
172 Pages
Reviewed on 05/05/2020 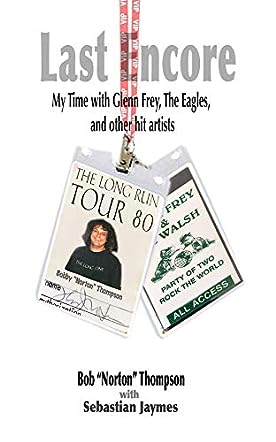 Sebastian Jaymes grew up on the "North Coast of America" on the Great Lakes, near Lake Erie. At a very early age Jaymes decided he wanted to see the world. At the age of nineteen, through a twist of fate, he was able to realize that goal as a roadie, then tour manager for two hit rock n roll bands.
In the late 1960's he worked with up and coming artists on a wild ride through the latter days of the 60's counter culture.
He settled in California in the early 1970's finding his way into the mainstream of the LA entertainment industry, first as a roadie, tour manager, or PA on network TV shows, then as a production manager. He moved on to tour manage various celebrity artists, touring the world over, fulfilling his dream to "see the world on someone else's dime."

Jaymes wrote a 3 vol. memoir of his travels and adventures:
"Memoirs From The Road To Everywhere Vol's I-III, as well as a fourth memoir about "Norton" Thompson: Last Encore My Time With Glenn Frey, The Eagles, and Other Hit Artists

As a live show producer he has put together shows on exotic islands, Castles, Archaeological ruins, exotic and sometimes dangerous locales in the Middle East, Europe, Asia, Japan, Russia, the Caribbean, Alaska, and around the world. He has a passion for Travel, Archaeology, and the American Civil War and has visited battlefields and ancient ruins worldwide . Jaymes currently lives in California, writes books and screenplays,

Last Encore: My Time With Glenn Frey, The Eagles, and Other Hit Artists is a memoir written by Bob “Norton” Thompson with Sebastian Jaymes. In his introduction, Jaymes describes meeting Norton for the first time in the 70s, when they were both roadies. Norton, so-called because of his resemblance to the Honeymooners’ character, Ed Norton, was a Jersey boy and so was a bit larger than life compared to Jaymes with his Cleveland roots, but the two formed an enduring friendship and were always glad to see each other and, if possible, throw some good opportunities the other's way. Norton’s big score was Glenn Frey and the Eagles.

Frey was the epitome of a gentleman of rock and roll, and he treated his roadies with respect and decency. The friendship which grew and endured between Norton and Frey outlasted the Eagles themselves. When Jaymes and Norton decided to embark upon this project, Norton had begun suffering from mild dementia and found his memories were apt to disappear and then turn up again. The two old friends and colleagues spent hours on long-distance phone calls getting his stories straight and in order. Jaymes frequently reminded Norton of one of his own wild adventures to get Norton remembering again. And while Jaymes actually organized and wrote down the stories in this book, they are all Norton -- every one.

Bob “Norton” Thompson’s rock memoir Last Encore starts out with two broke kids from New Jersey heading out to LA where one of them supposedly knows a guy who will put them up and show them around. And, as one might expect, there is no good friend out there, but somehow, they do manage to stay a few days at the home of the guy who actually had met one of them once -- and from there it is history. Anyone who’s ever wondered what the life of a roadie, or a musician for that matter, is like should pick up this honest and forthright memoir. The long hours, backbreaking work, and stressors are there right along with the excitement of being part of a musical group, of being backstage and belonging there. Norton shares the highs and lows, the crazy pranks, and the downers such as being fired in Europe. And you don’t have to be a big fan of the Eagles, Joe Walsh or any of the other musicians discussed in this memoir. The magic will still happen as you read about the life of a consummate roadie. Last Encore: My Time With Glenn Frey, The Eagles, and Other Hit Artists is highly recommended.