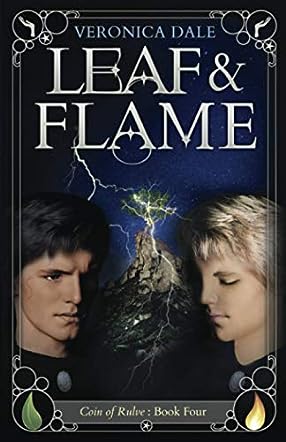 Veronica Dale writes five-star literary fiction seasoned with dark fantasy, psychological thriller, romance, and the spiritual journey. After earning two master's degrees, she has worked as a librarian, a pastoral minister, and currently as an award-winning author. Her books consist of the short story anthology Night Cruiser, followed by the four novels in the Coin of Rulve series: Blood Seed, Dark Twin, Time Candle, and Leaf and Flame. All four Coin books won the Reader's Favorite Silver Seal.
Dale says she started writing because she had to. “I’ve read so much, felt so much, and learned so much that the inner well just got filled up. Everything has to overflow somewhere, and for me it was in writing.”
For 26 years she served as the outreach coordinator for a large Catholic church in metro Detroit. During that time she initiated many programs that dealt with race relations, the environment, and peace and justice issues. As the VP of an international family support organization, she served as a US delegate to seven World Assembly of Families on three continents.
If asked which two books (one fiction and one non-fiction) she’d take with her if marooned on a desert island, she’d name Lord of the Rings and Creation and the Cross. The first she regards as one of the greatest fantasies ever written. The second is a work by renowned theologian Elizabeth A. Johnson. Works like these, she believes, cast light on a sometimes dark world.

Leaf and Flame is a work of fiction in the fantasy, romance, and adventure subgenres, penned by author Veronica Dale. This fourth and concluding novel in the Coin of Rulve series is suitable for teen readers and adults alike due to its non-graphic action scenes and sweet romance presentation. Leaving their loves behind, Sheft and Teller head towards a future which they are certain, by prophecy, will lead at least one of them to death, and with the knowledge that it may even contribute to the strength of the dreaded Lord of Shunder in fulfilling their mission. What results is a twisting plot with many final shocks to conclude this epic fantasy series.

Author Veronica Dale weaves a captivating conclusion to her excellent series with this final volume, in which the central heroes are put to their ultimate test. Gentle reminders return readers to the continuing story as it unfolds, and Sheft and Teller swiftly become as real as good and evil itself, thanks to Dale’s emotional resonance in her character development. I felt that the protagonists reacted bravely yet realistically to the gravity of the task before them, and much is made of inventive and compelling dialogue to give us insight into their mindset as tension builds and their twin fates are drawn nigh. The plot itself contains more than one surprise that brings about a truly thrilling conclusion, and overall I believe that fans of the Coin of Rulve series will adore Leaf and Flame for its poignant and action-packed narrative.

Leaf and Flame is the fourth and concluding novel in the Coin of Rulve Series by Veronica Dale. The story of twin brothers Teller and Sheft continues as they try to make sense of what they are called to do. Sheft and Teller have reunited, but their job is not done yet. As the power of the Lord of Shunder is about to be unleashed on the world, the brothers do everything they can to stop him. With the burden of a dire prophecy looming over their heads, they leave their loved ones behind and embark on a final journey that might end with the demise of one of them. While Teller is trying his best to overcome the powerful lord, Sheft is afraid that whatever he does is only going to make it easier for that lord to fulfill his disgusting plans. Both brothers have their fears, but they aren’t letting those fears stop them. Can they beat the evil that is testing them beyond what they can bear? Or will it be the last call for them?

Leaf and Flame is a stunning conclusion to this brilliant series. What a fitting end to an incredible epic fantasy! Teller and Sheft have grown so much. They are looking at a bigger picture and understand that they can’t allow past failures to stop them from achieving the Creator Rulve’s plan. They would never think of themselves as heroes, but are portrayed as mere humans called to do a hero’s job. The Lord of Shunder is despicable, but he is a worthy adversary to Teller and Sheft. The brothers have become well-rounded characters who are now working together to achieve their redemptive goal. The plot is, once again, incredibly rich, complex and well-woven. The descriptions are vivid and the atmosphere was just perfect. I will miss these characters!

In Leaf and Flame by Veronica Dale, Teller and Sheft have a calling, a divine purpose guided by Creator Rulve. When Mariat was taken from them, Teller fears he can never be forgiven by his brother for failing to protect his wife and his role in how this came to pass. With barely enough time to recover, they continue their journey to stop the Lord of Shunder. Conditions in Shunder were desperate. The Spider-king had devastated the land, dammed the river, and ruined the soil, and with debts to pay and rising taxes children were thrust into slavery to pay debts. Sheft and Teller were meant to be the heroes of prophecy, to stand against the threat, but there is more expected of them; danger and desperation will be their companions as they try to fulfill their destiny.

Veronica Dale's Leaf and Flame is the final book in the Coin of Rulve series. Not having read the previous books, I was a bit lost in places, but I was still able to thoroughly enjoy the story. Clear attention has been paid to the world-building, from its design and religion, to the depiction of a wide array of different classes and races, and to how different places measure the passage of time. Teller begins to learn the reality behind his twisted memories and also accepts responsibility for the betrayal and consequences that are his to bear. There are some powerful, beautiful, and impactful lines that add to the complex plot. I enjoyed the internal struggles of acceptance and truth and how events are manipulated to force enemies to unite against a common goal. I enjoyed the character interaction, the plot surprises, and the sometimes heartbreaking moments that brought the story to life. I may not have read the whole series, but it was certainly a satisfying conclusion.

I did my best, and I'm glad the reviewer agrees with me!