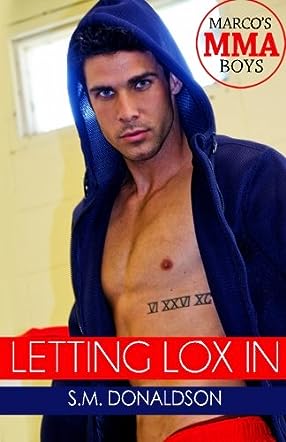 S.M. Donaldson is a born and raised Southern girl. She grew up in a small rural town on Florida’s Gulf Coast, the kind of place where everyone knows your business before you do, especially when your Daddy is a cop and your Mom works for the school system. She married one of her best friends at the age of 20 and has one son. She is a proud military wife, has always had a soft spot for a good story, and is known to have a potty mouth. At the age of 31, she decided there was no time like the present to attempt her first book. Sam’s Choice was born and she hasn’t stopped since. If you are looking for a good, steamy, Southern set romance with true Southern dialect, she’s your girl.

Letting Lox In (Marco's MMA Boys) (Volume 1) by S.M. Donaldson is a contemporary romance that puts two attractive characters together and asks how long they can take the heat before giving in to their passion. When Sloan became pregnant, her no good boyfriend dumped her. Now she's a single mom to her son, working as a massage therapist to put food on the table for him. Lox is running a gym with his best friends and working out as an MMA fighter who wants to go pro. When a fighting injury puts him on Sloan's massage table, the attraction is immediate. But Lox doesn't need the distraction of a woman in his life right now. He has too much at stake to deviate and lose focus. Likewise, Sloan isn't looking for love. She had all she could handle of men with her baby daddy drama. Despite their reservations, the two characters can't seem to get enough of each other. Is it enough to overcome their past and the obstacles in their lives? Or will they pass up the chance for true love?

This is a really nice, well written romance that fans of this genre will love. The characters are fully developed, with plenty of backstory, description, and motivation. Readers will totally understand why Sloan hates men and is hesitant to jump into a new relationship, especially as a single mother. Readers will also identify with Lox's posse's fast and loose policy around women. A very believable romance that is sure to delight!