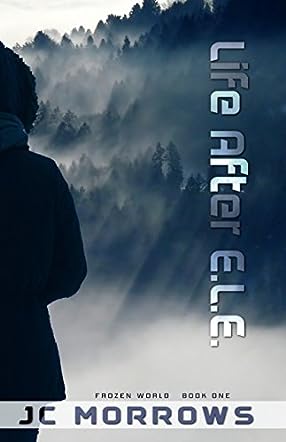 JC Morrows is one of those authors who grew up thinking it was perfectly normal to make up wild and fantastic tales, talk to people who weren't there, and look at the world from a perspective that no one else understood.

These days she records those fantastical tales (when her resistant laptop lets her) and the people who aren't there . . . well, she still talks to them. She tells their stories and even argues with them on occasion.

And she still sees the world in a way that makes sense to no one else, but that's OK because she is a teller of tales, a dreamer of dreams, a traveler of made-up worlds!

In Life After E.L.E., the first book in an exciting new series, Frozen World by author JC Morrows, we enter a white, frigid world. The earth has been struck by a rogue moon, causing chaos and an Ice Age Event. Preparations were made for this event, and many humans found shelter in pre-prepared caves, surrounded by forbiddingly high walls and a gate to keep out the dangers. Eve, our young heroine, is born in these caves, and all she's known of the world before are stories told to her by her grandfather. After a group of teenagers is brutally led out into the bitter cold outside the gates in the middle of the night, without any explanation, Eve starts to think slightly differently. Eve joins the hunting party to fulfill her part in the cave system. To say more from this point on will be too much of a spoiler, but I do warn you to make plenty of time to read Life After E.L.E.

Life After E.L.E. ( Frozen World #1 ) by J.C. Morrows is one of the most fascinating books I have read recently. I was captivated from the start, and only closed the book at the last page, which I really wasn't expecting! What a cliff-hanger. J.C. Morrows, I certainly hope the second book is on the shelves soon! The characters are realistic, the world cruel, and secrets seem to abound in the caves. Eve is an excellent female heroine, smart, strong, willing and able to do almost anything. She is highly perceptive, and training she has secretly received from her grandfather has her ready for most things. Yet she is also soft and vulnerable, scared to trust, and still hurting from the loss of her father. As the story unfolds, we start to suspect conspiracies, a bit of romance, intrigue and mystery. An extremely well written book with a consistent, almost breathless pace. You will find yourself completely immersed in this. Move over Hunger Games, a new challenger has arrived on the scene!

“Everyone knew the rules. They were taught to us almost from the day we could walk. The first rule everyone learned was to be inside the gates before dark, because once they were closed for the night, it was too late.” Life After E.L.E. (Frozen World Series, Book 1) by JC Morrows centers on a community of survivors in a frozen world, 30 years after a rogue moon collided with Earth. Seventeen-year-old Eve is trying to find her place in the Arizona Caves community ruled by a merciless chancellor. Everything seems to be working out when she joins the hunting group, but there’s a hidden truth that threatens the safety of her family and friends.

Despite the familiar post-apocalyptic theme and some similarities with other well-known dystopian fictions, the premise is intriguing, which is where the main strength of this book lies. Its prologue grabbed my attention right away, where the protagonist Eve tries her best to reach the compound before the gates close. She’s easily likable, but tends to evaluate some things repeatedly. The plot overall is well-paced, although there are some events in the story that I think could be developed quicker. This is not necessarily a weakness, but there's still so much to find out about the secrets that the young protagonist shared with her late father, and the conspiracy that lingers in the caves. On the other hand, it kept my interest from start to finish. On the whole, there’s a lot of unanswered questions in this Frozen World Series debut. Nevertheless, dystopian YA fans would find Life After E.L.E. a solid read.

Earth had turned into a frozen wasteland after being struck by a rogue moon. Population remnants are surviving in underground shelters. Those who do not obey the authorities are exiled into the wilderness. Eve, a seventeen-year-old girl, watched her father struggle to reach the gates before they closed for the night. The gates closed and she never saw her father again. The only thing she had left from him were memories and the secrets he told her. It was much later that she began to wonder whether his death was a simple accident. Five years later, she joined a group training to be hunters, which meant going outside into the frozen land. She was very good at everything and longed to become a fully qualified hunter. All this time, she felt that something was very wrong in the cave shelter, but she couldn’t pin it down. A romantic attachment with one of her classmates gave her someone able to steady her. During one training trip outside, the group stumbled across vast city ruins, and that is when the murders started. On her graduation test, Eve found herself in the forest, knowing she would not be able to reach the shelter before the gates closed.

Life after E.L.E. is a simple story about a young girl struggling to find her place in the closed society of a cave shelter, burdened with the knowledge that her father could have been saved, struggling to cope with a growing romantic relationship and the feelings it generated. JC Morrows presents an interesting and very well written scenario of life after an apocalypse, where adherence to rules ensures the colony’s survival, but it is not an idyllic existence, as Eve had found. However, probing too deeply could see her exiled in the wilderness, which meant death. Intended for young readers, the book is not burdened with complex characters or deep plotting. Nevertheless, adult readers will find this work entertaining.