The End of Echoes The Adventures of Jules Khan Life Lessons from Grandpa and His Chicken Coop 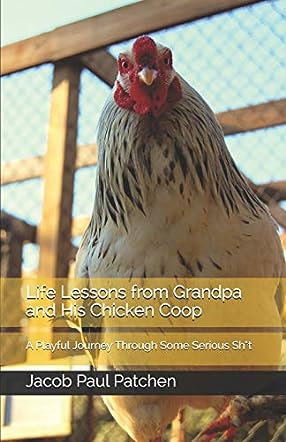 Jacob Paul Patchen is a strong advocate for love, family, and laughter. He is his mother’s favorite child (arguably), his grandfather’s ornery double (not so arguably), and the one who offers the blessing before holiday dinner. With his background in poetry and his open heart, he sees the world in a transcendent light. With a deeper understanding of the importance of life’s “little things,” enriched by his time spent at war in Iraq, Jacob offers a philosophical, light-hearted, and insightfully energetic tone to his writing style.

Jacob is an award-winning writer and poet from Cambridge, Ohio. He was the recipient of the Beulah Brooks Brown Award in Poetry and was selected as the feature writer for Muskingum University’s creative writing magazine, First Circle. Jacob graduated from Muskingum University with a bachelor’s degree in English while focusing on creative writing, journalism, and speech communication. Since graduating, Jacob has written a script for a feature film, started a blog (which has, almost and sort of, made him semi-famous in a small town), and created Jacobpaulpatchen.com, a website focused on creating a community of readers and writers.Life Lessons from Grandpa and His Chicken Coop: A Playful Journey Through Some Serious Sh*t is Jacob’s first book.

Growing up a few miles outside of a small village in the rolling hills of South East Ohio, Jacob spent most of his youth playing sports, spending time outdoors (i.e. climbing trees and hiding from babysitters), and finding his unique voice in writing. Feeling patriotic, he enlisted into the Marine Corps. Reserves during his senior year of high school. During his six year enlistment in the Infantry, he was deployed to the Al Anbar Province, Iraq in 2005. After his return from Iraq, with a better understanding of life and a renewed appreciation for opportunity, Jacob enrolled into Muskingum University to pursue a formal education in writing.

He is now living outside of Cambridge, Ohio where he balances part time work with full time play.

It is very obvious that Jacob Paul Patchen loves his grandparents. His book Life Lessons from Grandpa and His Chicken Coop: A Playful Journey Through Some Serious Sh*t focuses on the life lessons that Patchen’s grandpa taught him around the chicken coop that was on his grandpa’s property in Guernsey County, Ohio. The love from these lessons flows through the pages and it is hard not to feel it.

I first want to say that I wish I had grandparents like Patchen’s because they sound like amazing people. Life Lessons from Grandpa and His Chicken Coop is filled with short stories of the things that Patchen’s grandpa taught him. Each story is told with humor and honesty. I loved how Patchen’s grandpa taught him things by forcing him do them himself instead of the easy way and doing it for him. An example of this is when they were gathering eggs. Gathering eggs from protective hens is no easy task. In chapter eight Patchen writes that the greatest lesson he learned from his grandpa was compassion. I too believe that this is the greatest lesson one can learn. Compassion is something I believe more people should learn because not enough people have it.

I enjoyed reading Life Lessons from Grandpa and His Chicken Coop. Patchen’s book is funny at times, but it also teaches the reader a lesson. Love and take care of your family while you have them. I recommend this book to anyone who likes to read short stories that contain a good lesson.

Grab a cold one, this one will suck you in
By Liz on July 28, 2015
Format: Kindle Edition Verified Purchase

Riveting, hilarious, thought provoking, inspiring and heart wrenching.
*And it just might make you homesick*

From the opening of the book, I was hooked. I was captivated and couldn't put the book down; I wanted to find out just how much a chicken coop could teach. (Well, and see what other troubles the author could get himself into) I felt like the fly on the wall to the adventures of a mischievous boy; yet sitting here now finished with the book, I've somehow managed to gain all this insight from a chicken coop that I never imagined I would in my life, and I love it!

The author does an excellent job of painting the picture and drawing you into the scene as if you were experiencing it all in real time. Several times my kids came in to check on me to see what the heck I was laughing at.

It's real, the book puts country life lessons out as real as they come. I laughed, I nodded, I even cried. It hits home and will leave a person looking back on their own lives after reading it. We might not all have had chickens, but the author put all the lessons learned out perfectly to show that we all had a chicken coop. We all have had a *spoiler alert* white feathered devil to kick down and sh*t to shovel.

I finished the book with tears, We all need to be reminded that having morning company, photos of childhood mishaps and some of the chores we loathed as kids, are some of the biggest blessings and lessons we've been given in life.

I'd recommend this book to anyone looking for a snap back to reality, a bit of hope, a bit of laughter or anyone, for that matter, that has hit a point in their life that needs reminded that it's all part of the bigger picture.
I'd also recommend adding this author to a list of ones to watch.

I loved this book!!! The writer is a perfect story teller of the life living in the country near Grandpa and Grandma. How "family" is what life is all about. As I read the story, I laughed at how ornery he was, with a great imagination. A fun kid to be around. He made me laugh so hard. He made me see ( by his written words) exactly what was happening as he told his story. Oh how this book had me remembering my childhood in the country with my Grandparents living across the road. And raising a son with a loving heart, a big imagination and as ornery as a boy could be without getting into too much trouble. Thank you so much for this heart warming story!!!

Good read and especially descriptive of life growing up with his grandparents and family ties!

A MUST READ!!!
By Nicole Stevenson August 9, 2015
Format: PaperbackVerified Purchase

I felt like I was with the author on every page

I felt like I was with the author on every page. I laughed, cried and remembered my own childhood and life lessons. Great author! Ready for what's next!

Funny and intuitive!
By Amazon Customer on August 5, 2015

Must Read, Relax, laugh and enjoy

Humorous yet touching observation from a young man's perspective on life and family. Great read!

This authors ability to tell a story, in such great detail makes me feel like I was apart of that childhood, right beside him in that chicken coop. He always brings us right back to the life lessons we need to remember, in good times and in bad.

These are life lessons we all should live by. Keeping digging through the s*** that life throws at you and move on.
Recommend for everyone.

This book is amazing. The writer definitely keeps your interest the whole time. His views on life lessons and family values are admirable. Can't wait to read another book by him!

I'm so glad I read this book. It made me laugh out loud (a lot) and almost brought me to tears at times. Most importantly though it took me back home to life on my grandparents' farm and the love that our family shared there while we learned life lessons we didn't know we were learning. The way the author told the story made me feel like I was right there beside him running through the woods as a child in small town Ohio or on the battlefields of Iraq. He paints a picture with his words and is a true artist! I'm a total fan!

Enjoyed the view through the eyes of a child. Took me back to those days and I am amazed at the way "Patchen" took us on such a visual journey with so much thought and appreciation for growing up with discipline and love and lots of laughter. Makes one realize how everything in life can be a lesson learned, it's up to you to make it a positive experience.

Wonderful read. Made me snicker a few times. True events with a spin. Absolutely enjoyed this book. Recommend it to all. Thanks for the adventures