Death of a Rancher's Daughter 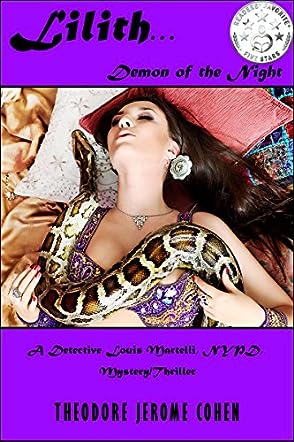 Theodore J. Cohen, PhD, holds three degrees in the physical sciences from the University of Wisconsin–Madison and has been an engineer and scientist for more than 45 years. He has been an investor for more than 50 years, and most recently has focused on investigating and reporting on corruption in US financial institutions and agencies of the US government. Lilith: Demon of the Night, about a New York City vampire cult, brings back NYPD Homicide Detective Louis Martelli, the hero he introduced in Death by Wall Street: Rampage of the Bulls and who later reprised his role in House of Cards: Dead Men Tell No Tales. \r\n\r\nFrom December 1961 through early March 1962, Dr. Cohen participated in the 16th Chilean Expedition to the Antarctic. The US Board of Geographic Names in October, 1964, named the geographical feature Cohen Islands, located at 63° 18' S. latitude, 57° 53' W. longitude in the Cape Legoupil area, Antarctica, in his honor. His Antarctic Murders Trilogy describes what happened following a robbery of the Banco Central de Chile in Talcahuano in May, 1960. Dr. Cohen's first novel, Full Circle: A Dream Denied, A Vision Fulfilled, is based on his life as a violinist. He also has authored more than 400 papers, columns, essays, and interviews for the popular, scientific, and technical literature.

Lilith by Theodore Jerome Cohen is one of this author’s fascinating Detective-Investigator Louis Martelli suspenseful murder mysteries. Martelli, NYPD‘s answer to Sherlock Holmes, is seldom inconvenienced by his prosthetic leg, courtesy of a tour of duty in Iraq. In fact, he learns that it is useful for much more than walking; it could possibly save his life one day. With his partner, Sean O’Keeffe, Martelli is stymied by the multiple murders their latest case has uncovered. The two are even more baffled by the apparent “vampire” connection to the murders. Good old fashioned investigative prowess, coupled with a lot of high-tech help from within the NYPD, starts to narrow the focus of their investigation, eventually leading them – by a long, circuitous route – to a suspect. At last they have a name to go with their suspect. Will they be able to locate him in time to make an arrest? Or will he manage to flee America, and avoid being arrested?

Lilith is great entertainment. Sprinkled with humorous camaraderie between and among the law enforcement community, the characterizations in this novel are flawlessly believable. The storyline could have been taken straight out of a New York Times front page news story. Every aspect of this novel could quite easily be peddled as Non-Fiction; in spite of the “vampire” connection, everything in this tale really could happen. Theodore Cohen’s novels have all been based on actual events, and thus carry an air of realism not always present in a novel. Lilith is fascinating, believable, realistic, entertaining, well-written, and a must-read for fans of good mystery stories.

Excellent, as expected! I'm really starting to like Martelli. The humorous interplay between the partners has a very genuine feel to it, and lends a great deal of credibility to the story.

The media is so flooded with trendy vampire stories right now I was incredibly impressed to read a “vampire” mystery that is completely unique to anything else that is out there. Fast paced with snappy dialogue, likeable characters and a touch of mid-eastern mythology, this is a book that I could really sink my teeth into. “Lilith: Demon of the Night” continues the Detective Louis Martelli, NYPD, mystery series. Being my first Martelli mystery, I did not feel lost in the series. The characters were well introduced so that the novel can be read out of the series.

In this tale, two NYPD detectives Martelli and O’Keefe are perplexed when they discover a corpse has been desecrated in a manner that might be believed to keep one from returning as a vampire. Further investigation through toxicology testing shows that the person did not die as first believed. He was murdered in a very unusual way. As the detectives pursue their investigation, more bodies start piling up, and they discover that other people have died in the same manner. These people seem to have some sort of connection to a mid-eastern couple and their young daughter. They also appear to have had blood drawn from them while they were alive, and to have been anemic.

Hmmh, if you are thinking what I was thinking, think again because there is a much more complex situation going on. This is what made this story so enjoyable to me; I did not expect the story to head off in the direction that it did. I am going to stop here, because I do not want to spoil this story. I just have to say that I really enjoyed the writing talents of Theodore Cohen, and think that mystery fans will agree with me. Highly recommended reading for both individuals and reader’s groups. “Lilith” will definitely provide material for some interesting, lively discussions.

Author Theodore Jerome Cohen brings his NYPD Detective Louis Martelli back with his partner Sean O’Keeffe in his novel Lilith, Demon of the Night, as the duo sleuths solve a bizarre series of murders dealing within the dark side of cult rituals and vampirism.

When a bullet is shot into the coffin containing a corpse lying in state at a funeral home from a mysterious cloaked perpetrator, the odd circumstances alerted NYPD’s homicide detectives to take notice. The obvious question of who would want to shoot someone who was already dead prevails; as other details emerge alluding to the rituals and beliefs of something out of Bram Stoker’s Dracula. Using silver through the heart, wood stakes to the chest, garlic in the mouth and even a mirror in the coffin, the detectives find these techniques used to keep a vampire rising from the dead as they exhume bodies linked to the trail of finding the serial killer. With twists and turns like a Boa constrictor, the venomous plot unfolds and transports the reader from a modern day high-tech crime fighting novel into the dark side of cult practices within the mind of a serial murderer fixated on revenge.

Theodore Jerome Cohen writes in a very convincing and discerning fashion, offering credibility to his characters with his commonsensical understanding of police investigative techniques. He embellishes his characters with a harmonized balance of dialogue and descriptions, achieving excellent visualization within the reader’s mind. The author’s written wit is consistent with stereotypical references to tough, macho police work, yet Louis Martelli possesses an intrinsic understanding of human nature. I found it rather clever that in many instances Theodore Cohen referenced prior instances of his character Martelli’s experiences from other novels, rewarding the loyal readers of his series with a bit of magniloquent pleasure.

Impeccably written with the obvious goal to entertain, Theodore Jerome Cohen once again effectuates what he set out to accomplish. Lilith is a trophy on any shelf, a book worthy of an afternoon’s reading enjoyment, a fine gift, or a welcome companion to take on a trip. Written for young adults all the way to mature audiences, Lilith – Demon of the Night stands on its own merit as an enjoyable read. When combined with TJC Publication’s other novels in the Detective Louis Martelli