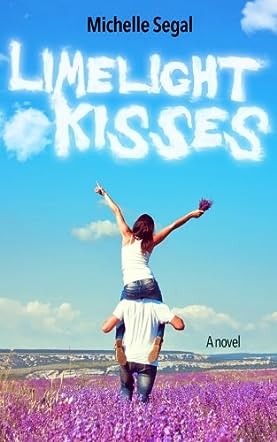 Limelight Kisses is the first book in the Love Behind the Scenes series written by Michelle Segal. Having walked into fame by accident, Katherine Walker is now one of Hollywood’s most successful and revered movie stars. Discovered by film director Ryan Lancaster, Katherine’s audition for her first film is a roaring success, as is each subsequent role she is offered. With a tragic past still haunting her, Katherine tries desperately to never disappoint her parents, but after meeting Ryan, the wall around Katherine slowly dissolves as her love for him grows. Not only does she give her virginity to him, but also commits her very heart and soul to him. Never had she thought a love could be so strong and so real. But as quickly as it had started, it was over without any warning. Unable to trust another man, Katherine moves forward in her career but each year on her birthday, she visits a special room at the Savoy Hotel in London, wishing, hoping that maybe...

Twelve years after Ryan had disappeared from her life, Katherine's most inner-felt desires are finally answered when he reappears in Katherine's life, desperately trying to rekindle the flame which they had once shared. Although she still loves him, Katherine can never trust him enough to let her guard down. When Ryan leaves a second time, Katherine must decide, once and for all, if she is willing to permanently let him go.

Michelle Segal’s amazing tale of innocence lost has left me not only breathless, but also leaves me excited and grateful for having chosen Limelight Kisses to read. The romance and true love which is felt throughout the story becomes that of the reader, as the tale pulled me in so completely that I was unable to put the book down. Ryan’s lust for Katherine was only matched by that of his dreams of rising up the ladder in his career until he reached the very top – something he would do anything to achieve. Katherine does not know what to believe and naively relies solely on her gut instincts. The assumptions and speculations of those around Ryan had hurt him, but Katherine’s warmth and innocence pushed past the lies, revealing his most intimate secret, leading Katherine to discuss the tragic past which haunts her. I definitely enjoyed each passionate encounter, which was written in a way that was not pornographic or vulgar, but rather enticing and believable. For those who enjoy top quality romance reading, I recommend Limelight Kisses as a must-read, as I will most definitely be adding it to my own personal bookshelf, to be enjoyed again and again.

Limelight Kisses: Love Behind the Scenes, Book 1 is a contemporary romance novel written by Michelle Segal. Katherine Walker was a law student who had only accompanied her friend, Mia, to the audition for a starring role in Mrs. Woodbridge's Daughters, a historical fiction film being shot in Williamsburg, Virginia, for moral support, but she had something that Ryan Lancaster knew was a winning combination. There was something about Katherine’s Audrey Hepburn-like looks and the way she carried herself, but when she read her lines and easily became the role of Theresa Woodbridge, he knew he had found a star. Katherine was not at all sure she should give in to the temptation of being in the movie. It would mean taking a leave of absence from law school; something her judge father would not be pleased about at all. Katherine was also concerned that he might have another heart attack if he got too angry, and she knew her mother was not strong enough to survive losing him. Still, she had always dreamed of acting, and Ryan stirred up feelings she had never experienced before.

Michelle Segal's contemporary romance novel, Limelight Kisses: Love Behind the Scenes, Book 1, is a compelling story about a love that survives years of separation and misunderstandings, and the challenges faced by Katherine and Ryan in rekindling their brief, long-ago summer relationship. I enjoyed the theatrical subplot that is woven throughout this engaging tale, and found the two main characters to be people I quickly began to care about. This is a well-written and beautifully plotted tale that works on a number of levels, and I was pleased to discover that it's the first book in a series rather than a standalone novel. Limelight Kisses: Love Behind the Scenes, Book 1 is most highly recommended.

As romance is not my favourite genre, what prompted me to select Limelight Kisses to read and review? It was how the author, Michelle Segal, described herself on Amazon. She says she lets "the characters in my novels try out all these crazy things," the stuff of her daydreams, the kinds of things her own life doesn't allow for. That made me curious about what lay behind the rather benign cover of Limelight Kisses. Just what kind of love story would take place under the pen of a writer with this mindset behind the scenes of a Hollywood movie set?

That's where I was introduced to famous movie star, Kathleen Walker, who was studying to become a lawyer when she accompanied a classmate to a movie audition. The classmate didn't get the part, but Kathleen did because she had just the look the assistant director, Ryan, had been told to locate. Of course, as these Hollywood romances go, Ryan and Kathleen fall madly and passionately in love but life, and especially Ryan's past, totally disrupts their dreams of eternal bliss in each other's arms.

Twelve years later, both now highly successful in their own fields, they are brought together again. But the beautiful Kathleen is bitter and resentful of Ryan's inexplicable, sudden departure from her life so many years earlier. Forced to work with him again on the set of the next Hollywood blockbuster, both must once again deal with the love each buried in order to move on from the past. Is there any hope of rekindling and reconciling their differences? In true romantic fiction style, Michelle Segal lets Kathleen and Ryan explore the possibilities.

In the acknowledgements at the end of Limelight Kisses, Michelle Segal admits the female protagonist is based loosely on the great Katherine Hepburn. Michelle also states that she "became very fond of Kathleen and Ryan" as she wrote Limelight Kisses. One senses that fondness in Michelle Segal's writing. She is enjoying telling this story and her readers will enjoy hearing it if romantic fiction is their choice in books.