Locked in the Past 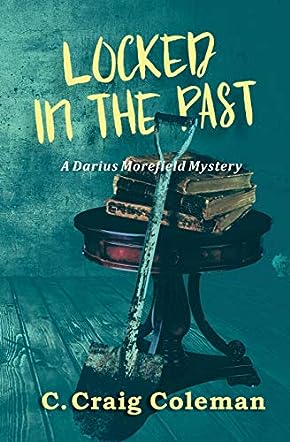 Locked in the Past: Darius Morefield Mystery Series #2 is a sleuth mystery novel written by C. Craig Coleman. Myrtle and her mom, Agatha Wittlesbach, have received a royal summons from Myrtle's Aunt Hilda, Uncle Clyde and Grandmother Hattie Brunsucker. Hattie is ailing and not expected to live much longer, according to Hilda. Neither mother nor daughter are looking forward to the trip to Konnotan, but for Myrtle, at least, there’s a silver lining to this cloud of a journey. Aunt Hilda has asked that Myrtle invite Darius and Alex to accompany her and her mother. Myrtle thinks that Darius’ skill in solving the murders in Higginsville makes him a prized guest for Aunt Hilda’s bridge club, and Alex, though he hates the idea of visiting the dowager and her daughter, thinks that maybe the change of scenery will do Darius some good. The two boys are awed when they actually see the imposing edifice that is Grandmother Hattie’s Greek Revival mansion, but Darius is strangely at home in this environment. Both Grandmother Hattie and her arch-rival and neighbor, Miss Delia, are enchanted by the courtly mannerisms of the young man. When the body of a town drunk is discovered on the Brunsucker’s property, Sheriff Dobbs also seems eager to have Darius stay in town for a while to help uncover the mystery behind the man’s death.

C. Craig Coleman’s Locked in the Past: Darius Morefield Mystery Series #2 offers the armchair sleuth two enticing murder mysteries to puzzle over along with the oddly intuitive Darius Morefield: one from the glories of the Gilded Age in the Deep South, and the other from modern times. This is the second book in Coleman’s Darius Morefield Mystery Series, and while the author gives readers enough background information for this book to be read as a standalone, I’d strongly recommend beginning with the first book in the series, The Rocking Crate, which introduces Darius, Alex and Myrtle as they solve a series of mysteries and demystify the secrets of a haunted house. I was immediately intrigued by Darius, whose cerebral and intuitive detecting skills are bolstered by what seems to be a gift of second sight. I have a particular fondness for iconic sleuths, from Sherlock Holmes and Hercule Poirot to Nero Wolf and Josephine Tey’s Detective Inspector Alan Grant, and have great expectations for Darius who seems quite comfortable in the presence of such august companions. Locked in the Past has a grand plot, and is a marvelous read. It’s most highly recommended.