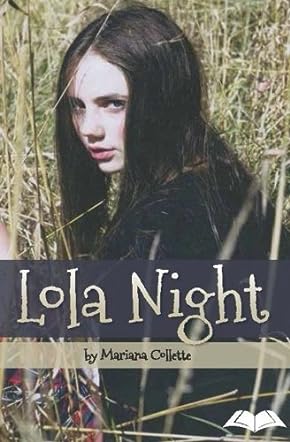 Lola Night is a young adult coming of age novel written by Mariana Collette. Everything came to a crashing halt right after Lola’s twelfth birthday. Lola’s grandmother was sent to prison for manslaughter after she had an accident which killed a young local husband and father while she was driving drunk. Then her mother, who always used to cry a lot at the best of times and wasn’t exactly the best mother in the world, had a nervous breakdown. Her best friend Amy’s parents, Alison and Nigel, took her into their home and were doing all they could to make her feel loved and wanted, but Lola worried about what had happened to her cat, who couldn’t come with her, and she couldn’t get over the fact that her grandmother was a murderer. Alison and Nigel were fabulous, warm, supportive and caring, and Lola got Christmas presents and found freshly baked goodies in the school lunches Alison prepared for her for the first time in her life. They all lived in a huge house with a pool, and Tim, Amy’s little brother, soon became Lola’s boon companion and swimming partner. Things with her lifelong pal and best friend, Amy, were not so good however. The two of them were finding living in the same house an entirely different thing than being friends. Amy didn’t seem to want to be Lola’s friend anymore, which made her life seem even more unreal than it already felt. Lola couldn’t help but wonder why couldn’t she have had a family with parents like Alison and Nigel instead of a drunken murderer for a grandmother and parents who were obviously not suitable for the task? It just didn’t seem fair.

Mariana Collette’s young adult coming of age novel, Lola Night, explores the life of a preteen girl whose birth family is a dysfunctional one at best. I loved being privy to Lola’s thoughts and looked forward to each of the lists she presented as she shared her thoughts with the reader. As I followed her life with Amy and her family, I could sympathize with her feelings of isolation and bouts of loneliness, despite the fact that, for the first time in her life, she was cared for and loved, albeit by someone else’s parents. You can feel the tension there as she tries so hard not to love Alison back, protecting herself from the pain of rejection and the reality of her temporary status in that family. Collette’s storytelling is marvelous; her writing fluid and compelling. I enjoyed getting to know Raumati, the small beach town in New Zealand where Lola lives, and seeing that part of the world through Lola’s eyes. Alcoholism, and the effect it has on families, is admirably treated in this perceptive and haunting coming of age tale, as is mental illness. The most important message that Collette imparts, however, is that even those kids who are the ones who got stuck with the dysfunctional families -- and there are an awful lot of them -- have a reason to feel hopeful and valued, and to believe in themselves. “Sometimes the best people, the most successful people, the special people, have really messed-up childhoods.” Wise words, indeed, and just a small part of what makes this book so extraordinarily good. Lola Night is most highly recommended.