Legend of the Rainbow Eater By Light of Hidden Candles 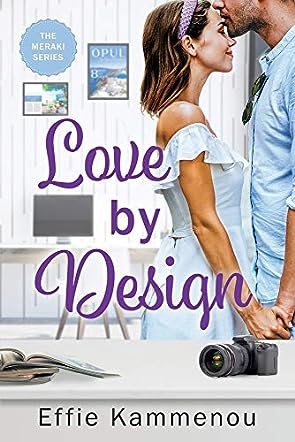 Effie Kammenou believes that it is never too late to chase your dreams, follow your heart, or change your career. She is proof of that. At one time, long ago, she'd hoped that by her age, she would have had an Oscar in her hand after a successful career as an actor. But, instead, she worked in the optical field for 40 years while raising her two daughters.

In 2015, three years after her mother's death from pancreatic cancer, she published her debut novel, Evanthia’s Gift, book one in a women’s fiction, multigenerational love story, and family saga, inspired by her mother and her Greek heritage. Kammenou continues to pick her father’s brain for stories of his family’s life in Lesvos, Greece, and their journey to America. Her interview with him was published in the nationally circulated magazine Reminisce.

The second book in her latest series, The Meraki Series, has recently been released. Both Love is What You Bake of it and Love by Design are contemporary romances following a pair of sisters and their quest for love and professional success despite their sometimes stifling and meddling family. But it wouldn't be a Kammenou novel without a delve into the past or references to mouth-watering foods. Book three: Krystina’s (untitled) story is in the works. Look for a release date in early 2022.

Love by Design by Effie Kammenou is Book Two in The Meraki Series. It takes place in 2019 in New York, Long Island, and the Hamptons but there are flashbacks to 1961 in Greece when the junta ruled after banishing the King and Queen of Greece and how it affected a particular family. They are the descendants of Panayiotis Nikopoulos who sent his wife to America away from the war and then disappeared. Her granddaughter Mia Andarakis starts to work for another Greek family, Pavlos Aristedis, and his granddaughter and grandson in the publishing industry decide to start a new magazine called Opul Life Style Magazine. This takes place in New York and then the magazine takes Mia and Nicholas Aristedis to Greece and Italy for photo shoots for the magazine. Mia’s family runs a restaurant and their daughter Kalley has her own pastry shop where her gran helps with the baking, specializing in Greek pastries. Mia herself is a graphic designer, professional photographer, and can do layout and edit articles for the magazine.

The main characters in Love by Design by Effie Kammenou are all intertwined and give the story a lovely lively atmosphere full of fun, especially when the whole family becomes involved in problems and intrigue. This involves misunderstandings between the main characters and the interference and help from their family and friends. The book catches your attention from the first paragraph to the last. What really makes it interesting is the family secrets that come out along with some family recipes. I really enjoyed reading this book and would love to find out more. This is the type of book you could go back and read quite often. I really enjoyed myself and got lost in the story. It is a delightfully written romance that includes intrigue and history. The recipes which are included are stunning and quite easy to do. A lovely book.