The Incredible Adventures of Absolutely Normal Rites of the Renouncer by Natasha A. Salnikova
Fiction - Suspense
Kindle Edition
Reviewed on 07/27/2016 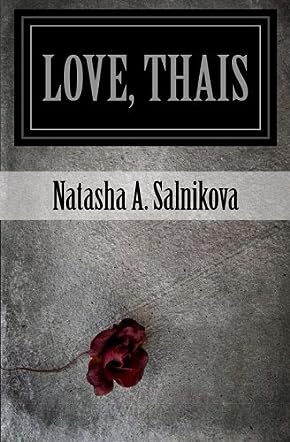 Love, Thais by Natasha A. Salnikova will enthrall those who love psychological thrillers. It’s a gripper, one of those “hard to put down” books, especially once it starts racing toward its mind-blowing ending.
Love, Thais starts gently. We observe a pregnant mother, father, and their first precocious daughter enjoying dinner in one of Moscow’s finer restaurants. The youngster, Erica, notices a strange looking, very scruffy woman with her face pressed against the restaurant window, staring at them, or rather at her father, Timur Ozin. Timur is the current hottie of the entertainment industry, adored by women everywhere, especially by the unkempt Thais.

However, Thais is anything but a normal love-struck fan. She’s a mentally unbalanced hoarder who lives in a filthy apartment looking after her parents and brother, all of whom were killed in a car accident. Read that last sentence again, carefully. She is also convinced, since once being handed a rose by Timur in a celebrity promotion event, that he is in love with her. As Thais sets out to prove to Tim just how much she loves him and how much they belong together, she sets in motion a sinister series of events that bring chaos and death, not only into the lives of Tim and his little family, but into that of his film director, and the unfortunate tenants of an apartment above Thais’.

To tell you more of what happens in Love, Thais would be to spoil your enjoyment of this thriller. Suffice to say, despite the length of the book, you’ll be turning the pages of the short chapters quickly. Natasha A. Salnikova has actually done an amazing job of letting readers see the mess inside Thais’ head, matched by the mess in her living quarters and habits. One initially feels sorry for the lonely, deranged Thais who is desperate for love. But beneath her loneliness and longing lives an enraged child who lashes out viciously when life doesn’t go as she wants, destroying anything and anyone who gets in her way. Thais is fictional, but we all know that people like Thais walk our streets or even live in the next door house or apartment. The thought of encountering a Thais is chilling indeed.

Natasha A. Salnikova is a prolific writer, the author of over a dozen books. Her specialty is dark, psychological, and supernatural thrillers. Those who enjoy reading Love, Thais have plenty more to choose from. I must confess, though, to a curiosity about where the author’s fascination with macabre humanity stems from. Does Natasha have a secret story yet to share in a memoir instead of a novel? Or is she just the female version of Stephen King? Whatever the case, she certainly is one skillful story teller.