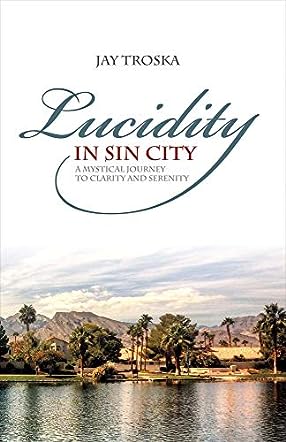 In October 2009, Jay had a mystical moment of clarity that caused him to engage in deep reflection concerning the meaning of life and the nature of reality. He later decided to spend less time working at the office in order to enjoy various avocational aspects of life, including more family time, golf, meditation, reading, and continued contemplation regarding life and reality.

Jay lives in the Desert Shores area of Las Vegas with his wife and two children.

Lucidity in Sin City: A Mystical Journey to Clarity and Serenity by Jay Troska is an autobiography about his life from the time he decided to move from Minneapolis to Las Vegas, Nevada. The story starts off with his background and growing up in the cold of Minnesota, when he decided to relocate to sunnier, warmer Las Vegas. He then talks about his various adventures and moving around in the Las Vegas area, including his smoking, drinking, gambling, brush with brothels, and online dating. As the story progresses, he meets his wife, starts a family, quits smoking and drinking, and the second half of the book explores his views on spirituality. This covers ideas from a wide range of sources and explores the collective unconscious, the meaning of life, the after-life, the essence of the universe, and a general discussion of ideas and views of philosophers from all walks of life such as Carl Jung, Ervin Laszlo, etc.

Lucidity in Sin City: A Mystical Journey to Clarity and Serenity by Jay Troska is an interesting read. However, it is important to note that the book is not strictly about a mystical journey as the title suggests. In fact, the first half of the book is an ordinary, although fun, autobiography and the second half is the part that deals with Troska’s internal thoughts and views on various spiritual and metaphysical subjects, and delves into exploring the meaning of the cosmos as well as the individual ego. Overall, I found the writing to be direct and straightforward, as if the author is “conversing” with the reader. A fun, thought provoking read.