Making of an Empress 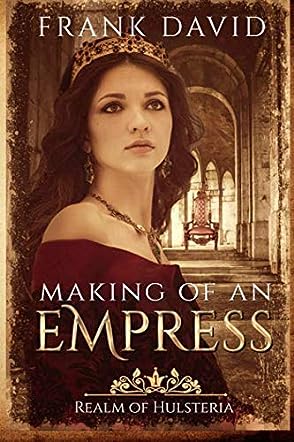 I am a simple guy who had a series of stories in his head about a period of time I've always loved. A friend encouraged me to write my stories out and I am glad she did.

Making of an Empress by Frank David is a gorgeous story with a powerful conflict, a story that features strong themes, including personal development, family, leadership, and the power of change. As the only person — her grandfather — who could help her harness the secrets of becoming an Empress is dying, Stelaphina feels like her world is coming to an end, especially after hearing his dying advice: “Trust no one.” The reader is introduced to a world of magic, filled with men and women who are frauds, and who will do anything to access the secrets of magic or stand in the path of the Empress. Stelaphina will uncover her gifts and discover her destiny, but it won’t be as easy as a walk in the park. This is a story filled with many lessons, insightful writing, and a lot of entertainment. Meet great characters, witness a moving drama, and travel into a fantastic world with Stela.

From the first sentences of the story, I was already certain that this would be a great read. The opening is filled with vivid descriptions and the reader’s imagination is provoked by the imagery: “The room was dimly lit with only the fireplace providing illumination. The shadows moved about the walls as the flames of the fire danced in the hearth. No other movement was present, no voices could be heard, only the crackles as the logs burned.” The power of the author’s prose doesn’t slacken or diminish in any way as it permeates the entire narrative. I was hooked from the very beginning of the story and there are many wonderful scenes I reveled in. The third-person narrative voice comes across strongly, and it combines literary elements like contrast, symbolism, and imagery to give more life and color to the already excellent plot. Those who are fond of fantasy will find delight in Frank David’s Making of an Empress.

In Making of an Empress (A Realm of Hulsteria, Book 1) by Frank David, 22-year-old Imperial Princess Stelaphina, nicknamed Stela by her grandfather Emperor Frederick, would soon ascend the throne and rule the seven kingdoms of the realm. She believes she is still too young, but her grandfather has faith in her ability. When the emperor dies from his sickness, Stela’s journey to be the ruler that her late grandfather had wished for proves arduous. Inevitably, there are others who desire the throne for themselves and those closest to Stela might not be trustworthy as they seem to be.

The world building has sufficient detail and depth to make it relatable. The plot is well-written in terms of dealing with real issues that a leader has to face. It actually reminds me of some of the world leaders today and their accountability in doing their job. Other than the politics, power struggle, family issues and betrayal, interestingly Stela too has to deal with bigotry from her people when she passes a law to remove crimes against homosexuality. The storyline has good, unpredictable twists, although I had some inkling of who’s going to betray Stela first. I feel that some parts of the story can be developed much faster. That said, the overall pace is good and the characters are believable with their strengths and flaws. Frank David is definitely another newcomer to watch out for in this genre. All in all, Making of an Empress is a solid debut for the Realm of Hulsteria series.

Making of an Empress by Frank David is the story of a woman who has duty thrust upon her, and the future of her people depends upon her every little decision. Stelaphina is the new Empress of Hulsteria, but when her grandfather died, he told her one thing: she should not trust anyone. This was a lesson she took to heart, but there is one problem that she cannot ignore. She has always thrived well when she is surrounded by her family, however, now the last words of her grandfather are making her second guess everything and anything around her.

However, that is not the only concern for her. Now that she is the empress, she gets to discover that the old tales of magic are not just stories; they are true. It is one of the most secret of secrets and only a fair few get to know about it. With such knowledge at her disposal, the final words of her grandfather are making sense. Is there someone she can trust? Can she trust her family, the people she loves, or the people whom she considers to be her confidants? No one said being an empress was easy, but no one said it would be this difficult. Can she do it?

Stelaphina is a strong character, and although she had no idea what she was doing at first, she caught on very quickly. Her character development was on point, she developed as the story progressed and this is where you get to realize that Frank David did an amazing job with Making of an Empress. The name of the novel fits really well with Stelaphina’s progress and her growth. It was a fast paced and really well-written novel that anyone who likes strong characters will enjoy. Very well-constructed and well-paced.