Man on the Edge 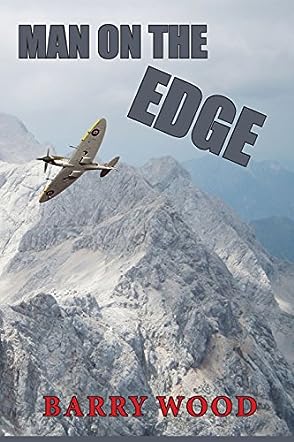 Man on the Edge by Barry Wood is a show-stopping WWII adventure story. It’s 1938; war is looming and the leaders of Britain choose to ignore the stark warnings from Churchill. Their mistake. It's 1940. France has fallen to the Nazis, unable to stop Hitler’s forces. England is on its own. Then a British spy finds out that a nuclear weapon is in development by German scientists and things are about to get a whole lot worse. James Royce, mountaineer and engineer, learns that he is the only one who can save the world. Daphne Elliot, an American heiress, once loved and then left by Royce, trains to become a ferry pilot and aviatrix. Kenneth Sommers, Spitfire squadron leader, falls for Daphne in a big way, while teaching her to fly and battling the German Luftwaffe. Three lives, irrevocably intertwined. Three heroes each fighting their own battles, both personal and military, but not everyone can come out of this unscathed and not everyone can survive.

Man on the Edge by Barry Wood is a fascinating tale of courage, danger and, ultimately, survival in a world where many won't see another day. This is a gripping novel, well written with a mixture of fact and fiction. Set out almost like a diary of events, Man on the Edge takes us through earth and life-shattering events using descriptive prose that draws you in and makes you feel as though you are there. This is more than just a story about the war; this is part adventure, part thriller, part romance, all woven into a fantastic story. The events are very real, perfectly described, and the emotions that run throughout the story are easily felt. We have a cast of likable characters for whom you can't help but feel an affinity, pulled together in a dramatic tale of full of action. Great story, and highly recommended if you want a book you can immerse yourself in and not stop reading until the very end.

Love, war, adventure, and patriotism are themes that readers encounter in Barry Wood’s Man on the Edge: A Novel. This is a wonderful story with great characters, set against the backdrop of the years leading up to WWII. Mountain climber and genius in engineering, James Royce is in love with a woman for whom he is ready to sacrifice a lot, but he blunders. He learns that he alone possesses the secret that could save England. Daphne Elliot has loved Royce deeply and, hurt by him, she focuses her energies on something else —becoming one of the finest wartime pilots. A whole new world opens for Daphne when she meets Squadron Leader Kenneth Sommers — it’s the beginning of an exciting and dangerous adventure.

The reader is pulled into an emotional swirl with compelling characters caught up in the dynamics of WWII. The reader quickly learns to care about the characters. My favorite is James Royce, whom the reader meets in the opening pages of the narrative, a man filled with regret for having hurt the woman he deeply loves. Barry Wood has a gift for plot and narrative and succeeds in weaving relevant historical elements into the story. The reader gets a strong feel of Britain in the years leading up to the war. I loved the extraordinary characters; each developed with a rich background, each complex and designed with a unique conflict to deal with. The writing is gorgeous and filled with vivid, cinematic descriptions that give readers clear images of the setting and the scenes. The dialogues feel natural. Man on the Edge: A Novel is a gripping wartime story, a delightful read that is character-driven, fast-paced, and intelligently plotted.

With World War II on the horizon, the world needs heroes. Man on the Edge by Barry Wood is a novel split into two parts mainly revolving around protagonists James Royce and Daphne Elliot. James is a man among men. He is a mountain climber and engineer who has trouble handling his emotions, while Daphne is a talented American aviatrix. The pair meet during a climb. James had immediately noticed Daphne. Unlike her friends, Daphne seemed to know exactly what she was doing. Not quite love at first sight, but the sort of longing and attraction between opposites. Of course, Man on the Edge isn’t solely a romance. Aside from James and Daphne, there is a larger story; the story of peril, adventure, and espionage building up to the Second World War, at least in the first half of the novel.

“Yet with it would come the beginning, and the end, of his undertaking.” It is seldom that authors can go full circle with their plots without a hitch, but Barry Wood succeeds with flying colors. Wood, author of the House of Graves books, pens for us a story about courage in a time when the entire world was on the edge of change and war. I loved how surprisingly well developed Daphne was. I had first thought she’d just be a side character, but she’s such an integral part of what gives this novel so much heart. I know the length of this novel may turn away some readers, but within its pages is an epic story that is a worthwhile read.