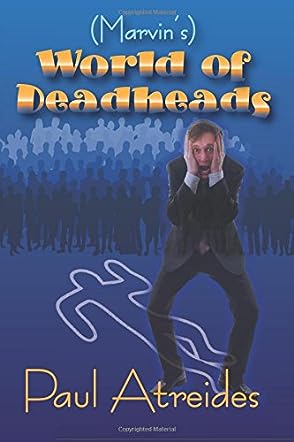 Marvin’s World of Deadheads is a novel written by Paul Atreides. After a morning filled with anger, Marvin Broudstein quickly leaves his nagging fiancée, Jenna, behind in their apartment in the hopes that he does not miss the bus. As he approaches the curb, Jenna gets his attention one last time through the window, resulting in Marv’s instant demise when he is hit by the bus. While watching his crushed and bleeding body, Marv is greeted by Tommy Kinkaid and welcomed to the afterlife, in a world filled with the spirits of those who have died, but have not moved on. Marv refers to these spirits as deadheads. His anger towards Jenna fluctuates like the tide, as he sees her make poor decisions after his death, but also witnesses her sorrow and broken heart now that he is gone. Marv is able to feel the pain Jenna experiences and finally understands the full extent of her love. His funeral is attended by many, both living and dead. After Marv witnesses a miracle occur between Jenna and his family, who not only loathe her but also blame her for Marv’s death, he realizes that anything is possible. As he socializes with more and more deadheads by going to the movies, to bars and restaurants, Marv makes many friends. But little does Marv realize that Jenna has quickly moved on to the next warm body, which may well cause her to have an out-of-body experience of her very own.

While quite gruesome at the start, Paul Atreides’ book quickly becomes one of hilarity as Marvin observes the lives of his family and friends after he has died. The cost of Marv’s funeral almost knocked the wind out of me, but seeing how that particular detail was handled, both by Jenna and his father, was quite touching and remarkable. Marvin’s World of Deadheads goes into great detail regarding not only the thoughts that go through Marv’s mind, but also the feelings and sensations he experiences when he comes into contact with people or objects. As he discovers what he can and cannot do, he has many a laugh at the expense of those who’d hurt him in his life, or who hurt or try to deceive those he loves after he has died. I was unable to put Marvin’s World of Deadheads down once I started reading. The action and adventure in Marv’s antics and those of his Deadhead friends must be read to be believed. I thoroughly enjoyed reading such a well-written, exciting and suspenseful book filled with a great deal of laughs, and recommend it to those who like to step outside the box and see what possibly lies ahead after we have gone. I look forward to reading the highly-anticipated sequel.

(Marvin’s) World of Deadheads by Paul Atreides is a delightful mix of dark comedy and romance revolving around the lives, and death, of Marvin and his true love. Fortunately, hippy Tommy and old college roommate Mike are on hand to teach the recently deceased Marvin the ropes while he spends his time stalking his fiancée Jena. We soon learn that life after death is pretty much what you make of it, and there is lots of fun that can be had just messing with the living.

I enjoyed reading (Marvin’s) World of Deadheads, especially the interaction of the three friends and how they strove to look after one another. I enjoyed a bit less the angry, jealous tirades Marvin throws in the face of Jenna’s attempts to move on with her life without him. At times, I wondered how anyone would ever find love in such a volatile situation, but the reality is some relationships do grow out of adversity, such as the one romance Paul Atreides created.

Atreides does an awesome job of creating and defining the parameters of an afterlife for those souls who do not move on immediately to heaven or hell. He also explains how our behavior even after death comes with consequences, and even when you don’t realize it, someone is always watching you. Perhaps my favorite part of the whole story was the realization of how little the living are aware of what goes on around them, and how easily some people are willing to explain away anything outside the realm of normality.