Shani and Her Dad An Abundance of Caution 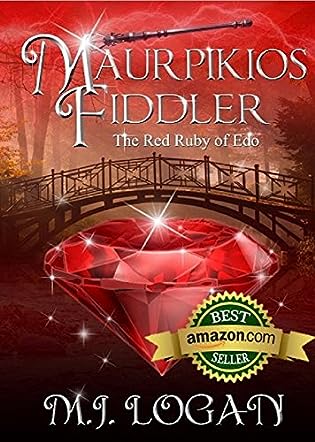 M.J. Logan is an avid reader, with Christian fantasy being her favorite genre. She is a dynamic multi-talented individual who began her career in health care as a pediatric nurse. After earning her doctorate and reaching the heights of her career at a very young age, she experienced personal tragedy and decided to pursue her passion of encouraging and inspiring the future generations of the world. She has been a writer for most of her life, but The Maurpikios Fiddler series is her first venture into the world of fiction, with many works to come. The Red Ruby of Edo— the third installation of the Maurpikios Fiddler series was written to continue her journey of inspiring both past and future generations to believe that magic and the miracles of God are but one in the same. She resides in the Southeastern United States with her husband and two sons, and her favorite charity is St. Jude’s Children’s Research Center in Memphis, Tennessee.

Maurpikios Fiddler: The Red Ruby of Edo is book three in a series of extraordinary tales of magic, hope lost and found, and love, written by M.J. Logan. Readers are presented with fantasy at its best, with sophisticated characters and a powerful conflict between the forces of Good and Evil and a very dangerous spell. The Treaty of Earthly Peace has met many challenges, but not the spell of perpetual seasons. Now the bad witch Apollonia — one of the faithful servants of the Dark Angel — has cast this spell on Hallows Creek and the world stands in grave danger. Only one thing can save it from the pervading darkness: The Red Ruby of Edo. Will Maurpikios Fiddler and the children of the prophecy succeed in awakening the only power to help reverse the curse?

This is one of those books that can only be described with superlative adjectives. It was more than a great read, it was a lovely gift. M.J. Logan literally transported me into the world of magic, with powerful characters and magical names. I was intrigued by many things and the idea of the legend of Nivalis was just awesome. I would want to read all the books in this series. That said, let’s look at the merits of this book. First off, the writing is stellar, offering sumptuous passages rippling with action and many colorful descriptions. Excellently plotted, this is a book that combines a quest, an adventure, and strong conflict to create a delightful read. Maurpikios Fiddler: The Red Ruby of Edo is one of the books I will read again besides the Harry Potter series.