by Terrene A. Davenport 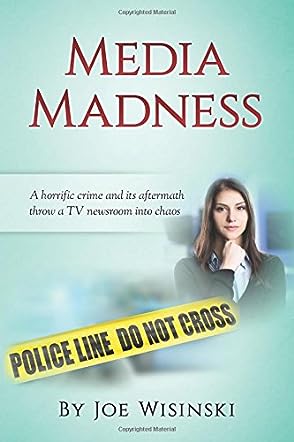 In Media Madness by Joe Wisinski, we meet Dave Wilson, news assignment manager of WERI-TV in Erie, Pennsylvania. He goes home late from work one night and finds his wife Debbie murdered; blunt force trauma to the head. With Dave emotionally crushed, investigators show up and find a bloody hammer in the garage. Suspicion immediately falls on a handyman who had been there earlier to clear snow from the driveway and to fix a step. It’s an easy case until the handyman is acquitted for lack of motive. Dave is convinced that the jury made a terrible mistake and harbors a sense of injustice over his beloved Debbie. Wisinski’s smoothly written novel takes off from there and into the TV news racket, the gossip and machinations in the station’s office, and the arrival of a beautiful novice reporter whom Dave is assigned to coach despite his contempt for her ditzy reports. Then, astounding Dave, the investigation into his wife’s murder takes off in a shocking new direction.

What I liked most about Joe Wisinski’s whodunit, Media Madness, is the wry humor, with the many humorous analogies scattered about: “meaner than a hungry bear with cubs”; she was “hotter than a three-alarm fire.” I also enjoyed learning about Erie, a rarely written about area of the country, especially the Pizza Murders, ox roast, and Smith’s dogs. Another pleasure was seeing the inner workings of TV news and learning some of the jargon: spray video, A-block, comps, dipping in, deep background. Especially, I liked Dave—an ethics-minded newsman who’d rather be a teacher. He has a sense of humor, an enduring love (yet an eye for pulchritude), a love of serious hiking, and a need to find his wife’s murderer. The plot is a tangled web unraveling toward clarity, the characters finely drawn, the news and court setting informative, the mystery baffling, and the ending supremely satisfying—in all, a triumph of mystery writing.