Encountering the Great I Am 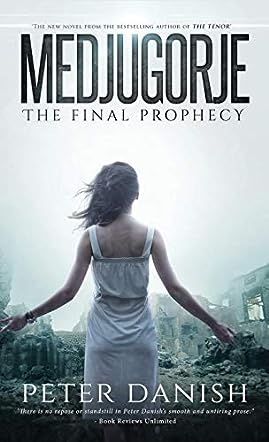 On June 24, 1981, two Bosnian teenagers, Mirjana, then 16, and Ivanka, 15, were walking near their nondescript village of Medjugorje in what is now Bosnia and Herzegovina, when Ivanka told her friend she could see an image of the Blessed Virgin Mary. Mirjana told her it was impossible and they went on their way. But the following day they returned, this time with an entourage comprising Vicka, 17, Ivan, 16, Marija, 16, and Jakov, 10. The apparition reappeared and this time they had a conversation with the Virgin. They continue to have apparitions to this day. And the rest, as they say, is history. Such is the factual background of Peter Danish’s Medjugorje: The Final Prophecy. Hundreds of books, mostly non-fiction, have been written about the phenomenon of Medjugorje in the intervening years, but this book is a fictional tale woven into the historical and geographical setting.

In the story, Tony Marshall is a rather brash American film maker, a loser really, whose career is yet to head for the stars. He decides to visit Medjugorje - a place he has heard about, though obviously with little detailed knowledge. He finds himself on a bus from the nearby city of Mostar with a group of fellow passengers of varying faiths and ethnicity. The short ride becomes a marathon, however, and Marshall and the others are forced en route to stay in a run down inn. It is there that they become fascinated by a young girl, the innkeeper’s seventeen-year-old daughter who seems to possess a remarkable insight into the apparitions and the visionaries. A plan is hatched that, if successful, will earn the group a lot of money. But there’s a delightful twist in the tale.

Descriptive narrative and script-like dialogue bring the story to life. I liked the concept for the tale as a whole. It is not a powerful saga — the real power is in the factual background. The characters do speak from the page, however, and all have an interesting backstory. Peter Danish has put a lot of research into Medjugorje: The Final Prophecy. Despite the fact that it is estimated that what used to be a small and remote Bosnian village has had some forty to fifty million visitors since 1981, there are millions more who have no knowledge of the place or the reason for its fame. If a reader comes within the latter category, I would highly recommend this book as a way of getting to know something about the phenomenon without having to study one of the hundreds of non-fiction texts about it. Whether you believe in the background setting or not, Medjugorje: The Final Prophecy is sure to raise interesting questions for you.