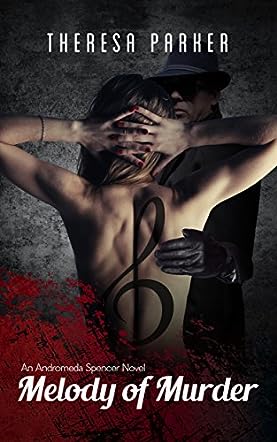 Theresa Parker was born in California where she continues to live with her husband. Her love for reading gave her the inspiration to write stories of her own.
Theresa is constantly creating. She loves designing book covers and creating guided meditations for relaxation. However, her greatest passion is writing and
she loves to make people laugh. She believes there is no better feeling than putting a smile on someone’s face or making them laugh out loud. She knows her
books may not change someone's life, but she hopes that they will make people forget their problems for just a little while and lighten their hearts. When she's
not pounding away on the keyboard, you might be able to find her lurking on her FaceBook page, giggling over funny pictures and making kissy-faces at cute animals.

A serial killer is on the loose in Fresno, and an unwilling psychic is coerced into joining the FBI in their search in the delightful and amusing paranormal mystery, Melody Of Murder (An Andromeda Spencer Novel Book 2) by Theresa Parker. Struck by lightning at the age of sixteen, Andromeda Spencer had several additional unique senses. A medium with psychometric capabilities, Andromeda begins working with Captain Johnson of the Fresno Police Department. For the past ten years, Andromeda's capacity to see and talk to ghosts, and her ability to receive information from an object or a picture, has been beneficial in assisting Captain Johnson in the recovery of kidnapped children and others the long arm of the law wishes to locate. Recently, a recurring Seventies hit song is haunting her. This aspect is a new twist to her psychic talents, and Andromeda can't understand its significance. At the same time, the FBI is in town on the trail of a serial killer, and they want to recruit Andromeda to their psychic team. However, Andromeda doesn't do murders, nor has any desire to add it to her resume. Unfortunately, they don't give her much choice when they believe the song she is hearing is related to the killings. The killer is changing his game, and the clock is ticking. Can the Feds capture the sociopath before one of their own falls victim to his diabolical plan?

Psychics don't take a backseat in the outstanding murder mystery, Melody Of Murder (An Andromeda Spencer Novel Book 2) by Theresa Parker. This intriguing novel has a fascinating story line which contains a thrilling plot and brilliant characters. I absolutely adore Andromeda and her quirky family and was smitten with them at the onset, especially Andromeda's demented grandmother and her dog, Rufus. It is a captivating story, filled with humor and intrigue, and I couldn't put it down until I reached the final page. This book is fabulous! It is professionally done and I am impressed. It totally deserves all five stars, and if I could have given more I would have done so. This is a cozy mystery at its best, and I am now an Andromeda Spencer fan. I can't wait until the next book in the series comes out! It does well as a stand-alone, but as addictive as the characters and story lines are, you won't want to miss any of Andromeda's adventures! Anyone who has a penchant for mysteries, amateur sleuths, snarky ghosts, and psychics will love this series.