What Do I See By The Sea? Valley of the Dogs Dear Me, Letters to Myself For All of My Emotions 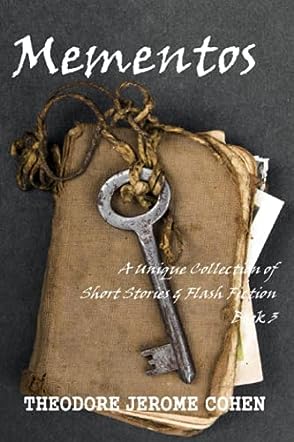 Theodore Jerome Cohen's eclectic Mementos (A Unique Collection of Short Stories & Flash Fiction, Book 3) reflects on both ordinary and extraordinary situations from the perspectives of diverse characters. In its first entry, ‘Devil’s Horns’, a father and son survey the fire damage to the family’s property in central California while searching and hoping that a missing family member and their dog will turn up soon. ‘Sportscaster’ is about a young radio sports commentator in the mid-1930s who would be eventually known as the influential voice of modern conservatism decades later. Literary and poetry enthusiasts will appreciate ‘The Lamplighter’ as a man reminisces about his deceased father, including Robert Louis Stevenson’s poems that he read to and discussed with his son before bedtime. One of the poems is a metaphor for the bond they had before he passed away.

The beauty of the violin and the spirit of Christmas are internalized in ‘Foliage’ and ‘The Old Man’ - brief insights into Cohen’s own life including his eldest daughter. Epitomizing the reality of our world today, 'ICU' is about a patient who asks his friend for a favor just in case he doesn’t make it. “I knew the dame was bad news the second she walked into my second-floor office.” Nostalgic, cynical, and fun, 'Film Noir' will delight fans of the genre; it reminds me of the old radio series 'The Adventures of Sam Spade, Detective'. As ‘Idyllic’ ends the collection on a beautiful but melancholic note, this wonderfully narrated compendium is filled with intriguing photos and endnotes providing information in true Theodore Jerome Cohen style. Mementos is truly another treasure trove of stories that encapsulate a panoply of human complexity, a gratifying gift of short and flash fiction from Cohen to his long-time fans.

Mementos: A Unique Collection of Short Stories & Flash Fiction—Book 3 by Theodore Jerome Cohen is a series of unrelated narratives. Cohen used photographic prompts to write his stories because, as he says, photos are memories, and “memories [are] the prompts we use to spin words and phrases into literary tapestries.” Some of the photos and accompanying stories are based-on-fact incidents about a future president, Ronald Reagan, when he was a young radio announcer, a humorous story about attractive adult twin women, and a look into the future if climate change continues. There are more than 40 stories altogether. Cohen says there is a story “for almost every genre and taste,” and he’s correct. Many of the stories contain a surprising twist at the end.

This is a charming, entertaining book. I liked the way Cohen mixed so many types of stories—whimsical, sad, historical, humorous, inspirational, and more. As a fan of Ronald Reagan, I enjoyed the account of a snippet of his life. I laughed out loud at the twins as well as at a story about a model railroad. The story about life in the future because of our changing climate made me think. Overall, almost all of Cohen’s stories bring a moving, compelling reaction to his readers, which I’m sure is what he intended. The photos are all beautiful and although some are sad, there is nothing offensive. I recommend Mementos: A Unique Collection of Short Stories & Flash Fiction—Book 3 by Theodore Jerome Cohen to anyone who wants to be amused, inspired, or entertained.

Mementos: A Unique Collection of Short Stories and Flash Fiction, Book 3 by Theodore Jerome Cohen is a collection of 45 exquisitely written short pieces. Each story is based on a photograph and a prompt line for an online weekly contest. The stories include useful footnotes. Mr. Cohen describes the entries as complete stories with “plot, characters, hook, and slam-bang finish.” And his writing lives up to this description, making for quick, pleasurable literary reading. Some are only a few paragraphs, others several pages with a vast variety of settings and moods that demonstrate Mr. Cohen as a versatile and imaginative writer. His prose is direct, breezy, without frilly flourishes. He shows the ability to go deep into character quickly and empathetically, making each story a pleasure to absorb.

Mementos is a perfect coffee table book for those idle times when a quick brainteaser hits the spot like a fine wine. I enjoyed taking in the photograph, then the prompt line, and imagining where I might have gone with it. Then I read Mr. Cohen’s take and enjoyed the surprise of how perfectly the brief tale matches the set-up. It might be a man’s daughter and dog missing in a California wildfire, or a little girl awaiting her daddy not knowing he was just killed, or a SWAT team firing 110 rounds at a suspect, or a man’s wife and her boss mysteriously disappearing during a Black Friday shopping rush, or an “Old Dog” sign slowing down a neighborhood’s traffic, or even a fly on a wall warning a man of his imminent murder. The variety and perfection of these vignettes are mind-blowing. Take them one at a time and savor them. Mementos: A Unique Collection of Short Stories and Flash Fiction by Theodore Jerome Cohen is, indeed, as the title promises, one of a kind.