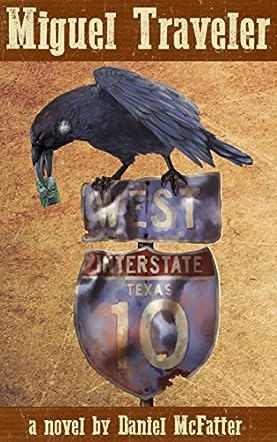 Daniel McFatter is just a simple traveler trying to make his way in the universe. He has worked in the oilfield industry for over 15 years and he believes Spanish should be required learning in Texas schools. He lives in Houston with his wife and a gaggle of animals, where he is currently writing his next book.

Miguel Traveler #1: The Man From Texas by Daniel McFatter takes us on a broad, sweeping science fiction/dystopian/philosophical/contemporary literature journey through the past, the present and the future. Miguel Morgan wakes up in the womb of a machine that he instinctively understands is his new mother. Once violently released from her warm embrace, Miguel takes the reader on a journey through a West Texas of the future, known now as the Outfar. During his adventure he will encounter, befriend and try to assist some of the few remnants left of humanity. This is a future world of fear and horror – where the few good humans left are terrorised by evil, zombie-like creatures afflicted with the laughing sickness. As time progresses, we journey back with Miguel to current times as he recalls how he ended up in this place and he begins to question who or what he now is, plus his purpose in this harsh, new world.

I found Miguel Traveller #1: The Man From Texas to be an absolute breath of fresh air, especially as a debut novel from Daniel McFatter. The characters, especially the irrepressible and very identifiable Crunchy, were both endearing and believable. I loved that Miguel was himself a fatally flawed character and was constantly questioning why he was given the responsibilities and power he clearly had. There was a strong philosophical thread flowing through the story that I found compelling. Based principally on the teachings of Taoism and of Buddha, but stretching through to include those of the modern “new age” thought as expressed in The Secret and The Law of Attraction, this deep thinking by the main character gave the story a greater depth and impact than just a dystopian thriller would have done. McFatter, in my opinion, beautifully tied together the different threads of the story and in good dramatic fashion left the reader wanting more at the end. I am sure this is just the first of a series on Miguel and his journeys, so I am looking forward to seeing Daniel McFatter’s next iteration of this character.

Miguel Traveler #1: The Man from Texas by Daniel McFatter is a futuristic sci-fi novel. Miguel Morgan is rudely brought back to the real world when he finds himself disconnected from his machine mother. As his fellow sleepers are ripped apart by creatures that were once men he realizes that the world he has woken up to is very different from the one he left behind. The Outfar is a land inhabited by humans, monsters, and human-like robots. All of the inhabitants are fighting for survival. When his savior leaves him at the Whistle Top mountain facility, Miguel is distressed by the state of its inhabitants. They have all but given up on life. As he works to save Whistle Top and its people, his mind takes him on a dark path back into his past. Will he find himself in time to save those he cares about?

This book has a Western feel to it that is easily picked up from the characters' drawling dialogue. As a post-apocalyptic work of fiction, Miguel Traveler #1 is a unique story told in a vibrant manner. I loved the plot of this story. Daniel McFatter took me on a journey into the past as the present unfolded, and it all made perfect sense. Miguel Traveler #1 is like a great appetizer before the main meal. I can’t wait to see what happens as Miguel explores the full extent of his powers. The author explores the spirituality of man in an intriguing manner that I found entertaining and inspirational. It makes one think about the bigger picture of our universe. I’ll be looking forward to more of Miguel Morgan in the future.

Miguel Traveler #1: The Man from Texas by Daniel McFatter is a powerful novel that left me with an uneasiness associated with the kind of feeling one gets after waking up from a very weird dream. The tale follows an unusual character, Miguel Morgan, who wakes up in a very strange world and is rescued by a mysterious woman. It is a post-apocalyptic setting with eternal creatures and desperate people. Left on his own, he has to make choices, but first he must survive. At a time when the human population has declined tremendously and in a world of the survival of the fittest, he contacts a human colony, perhaps the last of what is left of a semblance of human civilization. However, as he uncovers life in this colony, he is equally obsessed with questions. Does he have what it takes to face the truth and will the mysterious woman come back for him?

A great read for those who love post-apocalyptic stories with strong sci-fi and thriller elements, this book presents very compelling characters and a man’s search for meaning in a world that is as strange as it is hostile. The reader is gripped from the very start, thanks to the strong storytelling skills of the author and the vivid setting. It takes a lot of skill to make a fiction story realistic, especially one that is set in an imaginary, semi-desert world, and Daniel McFatter has that skill. Readers will feel a strong connection with the protagonist and there is a kind of darkness about the story that invades the reader’s senses in an irresistible manner. Miguel Traveler #1: The Man from Texas is balanced and deftly written, a satisfactory read for fans of the dystopian genre.

Miguel Traveler #1 by Daniel McFatter follows the new life of Miguel Morgan as he awakens, disoriented from a stasis that took him from his previous life. His rescue by a mysterious woman is short lived when she takes him into a world far beyond the present he knew. A world where civilization is long gone, zombie-like creatures roam, and dangers unlike anything he's ever seen lurk around every corner. The colony that gives him shelter doesn't trust him. As he searches for answers about his past, he unravels the secrets of this new world and discovers that the biggest threat may be closer than he thinks.

Daniel McFatter employs a unique structure, often breaking the fourth wall and addressing the reader, which makes it feel very personal, like a conversation or reading a long letter. The world Miguel wakes up in has a post-apocalyptic feel to it with zombies and a vast desert, people living in fear and desperation. Everything Miguel knew in a modern society is long gone and now considered relics of the past which aren't allowed in the colony, making for an interesting irony considering Miguel can also be considered a relic. His attachment to pop culture is rooted in modern society where he originates, and he often uses well-known references from Batman to The Jungle Book to form a connection with someone.

McFatter weaves through time, going back and forth between the dystopian future and the modern present so it almost feels like two separate stories, two distinct chapters of Miguel's life which are cleverly connected. Both timelines play an important role in Miguel's development and the more the past is shown, the easier it is to understand him. Miguel Traveler #1 is a gritty read that's emotionally driven and intense with a unique structure, complex characters, vivid descriptions, and riveting imagery.

Miguel Traveler #1: The Man from Texas by Daniel McFatter is a fascinating story that features elements of sci-fi, dystopia, and one man’s search to understand a world that is quickly falling apart. Miguel Morgan has just woken up to a terrifying world, a post-apocalyptic world where nothing is anything like he’d known. And this isn’t just a nightmare — it is the real world in which he lives. Rescued by a strange woman, he has to come to terms with his new reality, in the desert world of Outfar, where machines are very powerful and eternal beings mingle with the mortals, and where danger lurks everywhere he turns. Left with the last colony of humans by his rescuer, who has other pressing things to do, Miguel must find out the truth about the status quo. Is he ready for what he’ll uncover?

What caught my attention from the start is the unique narrative voice and the author’s creative, original way of saying things. There are insightful passages and reflections on life, light, darkness, pain, and purpose that will intrigue readers. The first person narrative voice gives a personal tone to the story and pulls the reader in right away. The prose is strong enough, evocative and highly descriptive, to keep the reader engrossed in the narrative, but what kept me turning pages was the story itself, featuring strong plot points and surprises that will make the reader’s heart jolt quite often. The tale is rich with imagery and symbolism and it is emotionally intense. Miguel Traveler #1: The Man from Texas offers the ideal escape for fans of the dystopian genre. I couldn’t stop until its satisfying denouement.