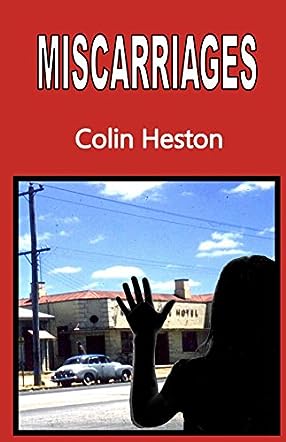 James Henderson’s alcoholic father was one of the pub regulars but, toward the end of his life, he would sit alone, drinking himself into oblivion. When readers first meet James, aka Chooka, in Miscarriages, he is sitting by his comatose father’s bedside, talking to him almost non-stop, hoping the memories he’s sharing with his dad might keep him alive just a little longer. When the old man passes, James is beside himself, feeling totally lost. Unsure of his true origins, and in deference to his now-dead father, he begins working at the pub under the watchful and loving eye of the publican. James falls in love and lust with 13-year-old Iris. Though these two sad, lonely young people don’t know it when they first hook up, James and Iris are soulmates. Over the course of the story, they move in and out of each other’s lives, alternately loving and raging at each other, their parents, relatives and a set of circumstances that have left them feeling they can’t trust anyone but themselves and each other.

In an effort to fulfill his father’s wishes that he finish school and become a teacher, James graduates and moves on to university. Thanks to a Bible-quoting police constable known as The Preacher, James ends up framed for murder. Convicted, but eventually freed, and still trying to find himself, he enlists to fight in the Vietnam war. He returns home, wounded and suffering from PTSD, and eventually finds Iris again, along with the surprising truth about his bloodline, as does Iris. Does this mean a happy ending for these young lovers? The twists, turns and miscarriages in their lives are complicated, sometimes downright funny, but for the most part heartbreakingly sad.

If you happen to be an Aussie, or someone who’s lived in Australia for any time, especially during the 50’s, then you will realize just how accurately Colin Heston has captured the lifestyle, grittiness and vernacular of laborers who gathered nightly in the local pubs sharing beers and miseries with their drinking mates in this young adult coming of age story, Miscarriages. But prepare yourself for some mighty strong language, plenty of easy sex, and some religious Bible-thumping. Miscarriages is a very different kind of book, in both style and content. Using narration, reflection and plenty of dialogue, it explores several disturbing themes, the most powerful being the personal isolation so many of us feel. Readers will find much of themselves in James, Iris and several other characters in the story, and they will come away knowing they have just read a brilliant, unforgettable book about real people. Miscarriages might be fiction, but you can be sure there are plenty of Chookas and Irises out there. A sensitive, touching and poignant story.