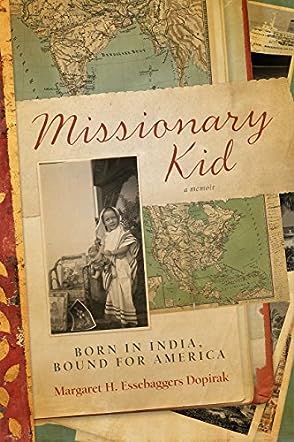 Margaret H. Essebaggers Dopirak is the daughter of missionaries and was brought up and schooled in India. She received her early education at Highclerc, a boarding school for children of missionaries, situated in Kodaikanal, South India. Subsequently, in the United States, she completed three years of nurses’ training at Illinois Masonic Hospital, Chicago, and attended Elmhurst College, Elmhurst, Illinois, where she earned a BS in Nursing. She later received a Master’s in Public Health from the University of Connecticut School of Community Health, Farmington, CT.

Being born and raised in India, Margaret realized early on that her childhood experience of growing up in a foreign country was very different from that of her contemporaries in America. Over the years, she was frequently reminded, through the curiosity and interest of strangers and friends, as well as family, that she might, indeed, have a unique story to tell. So, after a rewarding 40 year career in the field of hospital infection control and epidemiology - and during which time she raised her three lively sons - she turned her attentions to writing this memoir. A first time author, Ms Dopirak aspires to continue writing about her life-experiences and her family history.

Having traveled the equivalent of one and a half times around the world by the time she was sixteen, Margaret’s appetite for seeing new sites and destinations continued throughout her life. During her retirement years, in particular, she has traveled extensively with her husband, Bill, who is also a seasoned traveler. (Bill spent 20 years in the Navy as a submariner, affording him the opportunity to visit Scotland, Spain, Italy, and Guam.) Together, Margaret and Bill especially enjoy taking road trips within the United States, and have driven Historic Route 66 twice, visited all 50 State Capitols, and toured more than 150 National Parks. Trips and or cruises to the Panama Canal, Costa Rica, Prince Edward Island and other Canadian destinations, Norway, and Europe have been among their international travel destinations.

Margaret is a grandmother to 9 grandchildren and a four-time great-grandmother. In keeping with writing her memoir, it is no surprise that she has an avid interest in genealogy, and has accumulated a wealth of family history which she hopes to pass on to her progeny and descendants.

Life has its ups and downs, and growing up is difficult enough without the added stress of living amongst the poorest of the poor. Margaret H. Essebaggers Dopirak was a missionary child, an MK or Missionary Kid. Her parents were missionaries in India in the 1930s and after World War II, tending to the sick and the poor, including those with the dreaded disease of leprosy. In fact, Margaret, or Margie as her friends and family called her, was born in India and spent most of her growing up years in various disease-ridden and destitute parts of the country until she was sent to the MK boarding school at Highclerc (or Kodai School), situated in the South India Palani Hills.

Her experiences in India included many joys and sorrows and lots of frightening episodes, like the cockroaches that tried to eat her alive on her train ride home from school, or the countless fever-induced illnesses that she endured during her childhood. But, there were friendships forged that lasted a lifetime, and family bonding was stronger than one would see in most families.

Margaret H. Essebaggers Dopirak's Missionary Kid: Born in India, Bound for America, takes readers on a journey through two continents: India and North America. The author, though mostly educated in India, furthered her studies in the United States, training to be a nurse. As the reader looks into the life of the author's missionary family, they feel a vital part of a life's journey. This is a touching memoir of life as a missionary child in pre and post World War II India. Thank you for sharing your story.

The laconic style of writing in Margaret H. Essebaggers Dopirak’s book, Missionary Kid: Born in India, Bound for America, belies both the exotic nature of her childhood home in India and the historic time period of her life spent in the USA. The reportage nature of her writing also lends a similar laconic feel to her personality, as if neither locale registered any dramatically meaningful impressions. However, a much larger story lies behind the sparse words of an apparently normal girl living an apparently normal life; a story told as if it were merely background to the mundane events of a young girl’s life. From her often casual observations of deeply cultural images presented from Indian life – the low level din of train station beggars, unappreciated encounters with the identifiably foreign threats posed by cobras, malaria, and local swimming holes, along with an easily accepted existence living at a leprosarium – to the oblivious youthful disregard she holds for her war time passage across the enemy-infested Atlantic Ocean, “Margie” relates her story sounding much like a privileged child.

Margaret H. Essebaggers Dopirak is indeed privileged to have lived the life she tells about in Missionary Kid. Her book is filled with memorable documentary photographs showing confirmation of her words and perhaps telling more than she does about the often times hidden drama surrounding those historic years. Like any child absorbed by the wonder of her youth, Dopirak’s tale remains consistently self-centered and self-concerned as she pens a memoir intended to be personal and one-sided, only inadvertently disclosing what it means to grow up like any other child, but in an environment and locale completely different from that of her cultural peers. And this, perhaps, is the genuine interest of this book: how, in the end, one child’s life so exotically lived may seem just so very normal.

Missionary Kid: Born in India, Bound for America by Margaret H. Essebaggers Dopirak is an autobiographical account of life in the mid-twentieth century in India from a foreigner’s perspective. Missionary Kid chronicles the author’s life growing up in India just as colonial rule was coming to an end there. Her parents were missionaries and a large part of her childhood and early teenage years was spent in India. Later, the author grew up and went to boarding schools, and her travel experience as well as her adult life in America is chronicled as well. Margaret H. Essebaggers Dopirak takes us through the heat and tropical conditions of India, catching tropical illnesses such as malaria, and of course the native culture and places. We also learn about her life after she leaves India, her college experiences, relationships, and more. There are several photographs sprinkled throughout the book as well which add to the book’s narrative.

Missionary Kid: Born in India, Bound for America by Margaret H. Essebaggers Dopirak is an interesting glimpse into life on two continents and different societies and cultures. The book is written from an entirely colonial era perspective and does not offer insight into how the locals and native people of the Indian subcontinent lived and worked or an in depth glimpse into their day-to-day lives. This is probably because the author did not know that her world was different from theirs, although they all lived in the same place. I wish there had been a bit more of this aspect covered in the book as well. But aside from that, I found Margaret’s life story interesting and different and was glad to get a glimpse into that era.