Monster, Monster in the Tree 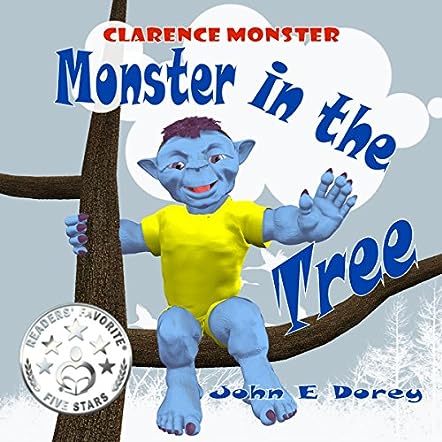 John is the type of guy who watches more cartoons than the average kid half his age, maybe a fourth - an eighth? Anyway, he has a very imaginative side and a high tolerance for silliness.

He would like you to believe all his characters are completely fictional figments of this imagination, but I'd be leery of entering his garage without someone accompanying you. After seeing his premiere kids book series Dragon In My Garage it's the best advice I can give.

Oh, and check out his stories for a little fun, adventure and of course - silliness.

Clarence Monster is a monster with a difference. He does not want to scare anybody. In John E Dorey's book, Monster, Monster in the Tree, a gentle monster called Clarence loves to play games. He doesn't hide and sneak around like all the other monsters do. Instead, Clarence likes to be outdoors and have fun. When there are no toys to play with, Clarence likes to use his imagination and create his own games to play, such as being a superhero or finding clues to solve a case when he pretends to be a detective. In Clarence’s imagination, he can fly through space with a rocket on his back, but when he upsets the aliens on another planet, Clarence decides the best thing to do is to leave quickly and peacefully. When he opens his eyes and finds himself back in his tree, Clarence is happy to be home again and uses the tree bark to scratch his itchy back.

Many birds and squirrels come to visit Clarence. He loves to listen to their songs and their stories. While looking down from his tree, Clarence can see and hear all of the different things that happen below. When things get noisy, he closes his eyes and pretends he is at a rock concert, listening to his favourite band called Robot Smash. Sometimes Clarence feels sad and lonely, like nobody cares, but then his imagination will make him smile again when he finds himself as a knight with a unicorn as his best friend, or even surfing at the beach while on vacation.

Monster, Monster in the Tree by John E Dorey is a beautifully illustrated children's book written in rhyme, and is a delightful story for children of all ages. It teaches children that even if you have no toys to play with, all you have to do is close your eyes and let your imagination take you anywhere in this world or the next, with your imagination giving you the best and happiest adventures to make you smile.