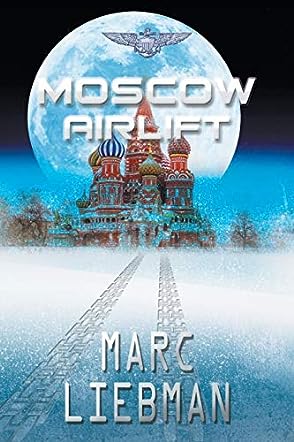 Marc retired as a Captain after twenty-four years in the Navy and is a combat veteran of Vietnam, the Tanker Wars of the 1980s and Desert Shield/Storm. He is a Naval Aviator with just under 6,000 hours of flight time in helicopters and fixed wing aircraft. Captain Liebman has worked with the armed forces of Australia, Canada, Japan, Thailand, Republic of Korea, the Philippines and the U.K.

He has been a partner in two different consulting firms advising clients on business and operational strategy, business process re-engineering, sales and marketing; the CEO of an aerospace and defense manufacturing company; an associate editor of a national magazine and a copywriter for an advertising agency.

Marc’s latest career is as a novelist and six of his books – Cherubs 2, Big Mother 40, Render Harmless, Forgotten, Inner Look and Moscow Airlift have been published. A seventh - The Simushir Island Incident - will be released in late 2018. Big Mother 40 was ranked by the readers who buy books on Amazon as one of the top 100 war novels. Forgotten was a 2017 Finalist in Historical Fiction in the Next Generation Indie Book Awards; a Finalist in Fiction in the 2017 Literary Excellence Awards; and rated as Five Star by Readers Favorites. Inner Look was also rated Five Star by Readers Favorites.

The Liebmans live near Aubrey, Texas. Marc is married to Betty, his lovely wife of 48+ years. They spend a lot of time in their RV and visiting their four grandchildren.

Although many people are probably unaware of this fact, by 1991 and for several reasons the Soviet Union had run out of grain. Faced with the threat of a starving population and mayhem, Gorbachev signed a deal with the USA, committing the Soviets to purchasing 8 million tons of grain over the next five years. World powers were then, and even more now, so finely balanced that the collapse of any country was not desirable. This one would send millions of starving Russian refugees fleeing to other countries. But the Soviets have more than just a food problem. Inflation rises, rumblings of dissent sound from within the ranks of the powers that be, and Gorbachev faces a coup. This is the perfect moment for Iran to illicitly obtain nuclear weapons. Seasoned Captain Josh Haman is sent by the US government to be their eyes and ears on the ground, and to submit accurate intel on the situation. But his impersonal attitude ends when he meets a KGB general who promises to give him the identity and location of the man who ordered the killing of his first wife and her parents. Josh is torn between his military goals and the personal desire to exact revenge. Plus, he meets a former flame from the past! Adding to that is a radicalized mole in the FBI and a bomb threat in New York…

Besides being a political thriller to satisfy even the most exacting of fans, Moscow Airlift by Marc Liebman is fascinating reading on world affairs. Although the title is Moscow Airlift, and the operation is named Operation Deny Famine, the action starts in 1971, in war-torn Laos. It moves over the years between Russia, France, the USA, Iran, Israel, Lebanon, Azerbaijan, Turkmenistan, and Uzbekistan. The narrative is detailed, perhaps overly so for fans who like to race through the action, but is perfect for those readers who enjoy savoring facts and minutiae. The author’s style is somewhat reminiscent of Frederick Forsyth, John le Carré and Terry Hayes. I am a huge fan of Hayes’ and Forsyth’s work and I appreciated this element of Marc Liebman’s tale.

The action starts at a time and place and involving characters that seem unrelated to the main actor and his mission. But be patient. Liebman weaves an intricate web of espionage and treachery, covert action and duplicity. All the threads, sub plots, and seemingly disparate characters are drawn together inexorably. The narrative is detailed, informative and succinct, yet the story flows without dragging. Liebman keeps the reader intrigued and reading on by changing the various scenarios quickly and this creates tension and interest. The author’s extensive military experience shows through in the story and plot structure.

There are too many characters to bond deeply with each of them, but Josh is the most well developed and necessarily so as he is the pivot around which the action turns. Danielle is also a character that readers will care about. The others are well drawn within their roles. Despite being a complex story with much to keep track of, Moscow Airlift was a surprisingly easy read. The historical background on Moscow Airlift, found at the end of the book, is well worth reading in advance. I enjoy political thrillers and especially when facts are woven carefully into a suspenseful plot, which is the case here. For fans of the genre, this is an excellent reading choice.