Stories Of Life From The Moose State And Beyond
by Marc E. Zimmerman
Non-Fiction - General
213 Pages
Reviewed on 06/19/2017 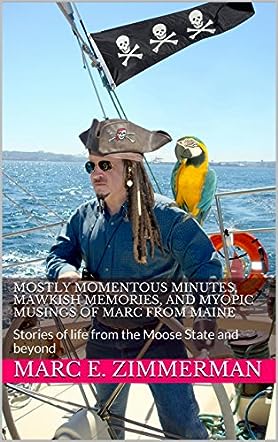 Mostly Momentous Minutes, Mawkish Memories, and Myopic Musings Beyond: Stories Of Life From The Moose State And Beyond is a nonfiction collection of humorous memoirs written by Marc E. Zimmerman. Zimmerman grew up in the small coastal town of Bath, Maine. His early stories recount the adventures and misadventures he and his friends shared, including the brilliant plan they came up with to race pumpkins, which were liberated from a local pumpkin patch, down a main thoroughfare. Each boy wanted their pumpkin to come out the winner, but no one had figured out how to identify their pumpkins; something they only realized as the orange missiles were careening madly down the uneven, potholed street. Later tales concern Zimmerman’s stints as a young adult working as a lifeguard on the nearby coastal beaches. Lifesaving was a given for the author, whose family members were all big on swimming, but the recent release of the movie Jaws had given a whole new thrill to the experience. After college, Zimmerman ended up in DC, initially as a legislative assistant for a Member of Congress. His stories from this era in his life give the reader an insider’s view of DC politics and life.

Marc E. Zimmerman’s nonfiction collection of humorous memoirs, Mostly Momentous Minutes, Mawkish Memories, and Myopic Musings Beyond, is a well-written and entertaining look at life from the author’s perspective and experiences. I especially loved his stories about Bath, having been one of the dreaded tourists who would descend upon Maine’s coastal communities for a number of summers. While I was not all that familiar with Bath, Maine, I soon found myself wondering why I hadn’t included that little coastal bit of paradise in my adventures north. Zimmerman includes a number of illustrations and photographs which work quite well with the stories, and I found myself so engaged in his writing that I frequently would search for more pictures and information on the internet as I read. His lifeguard stories are brilliant and inspirational, especially the one about his rescue of a drowning child, but my favorite tale of all would have to be the one about the neoprene-clad surfers. Mostly Momentous Minutes, Mawkish Memories, and Myopic Musings Beyond: Stories Of Life From The Moose State And Beyond is most highly recommended.