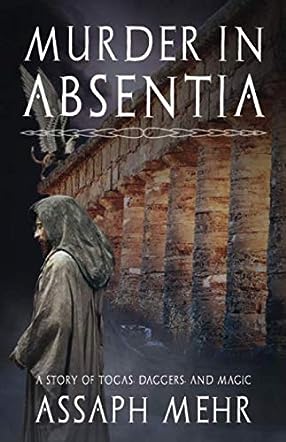 Assaph Mehr’s delightful murder mystery, Murder In Absentia, introduces us to one Felix the Fox, an investigator (or ‘fox’), living in Egretia, a place wholly reminiscent of ancient Rome. Felix has been hired by the Rhone of Fish, a man named Corpio, to look into the suspicious, magickally-wrought death of his son, Caeso. Felix’s investigations lead him to a secret cabal of magick users dealing in some pretty shady stuff. Further investigation takes him to Kebros, where Caeso spent time with his uncle, and met with a sibyl living on one of the more remote of the Kebric Isles. This meeting may very well have been what pushed Caeso along the path eventually leading to his horrific and painful death. Along the way, Felix gets attacked by pirates, meets the sibyl himself, has a brush with a deity-form on a lonely mountaintop, dines upon gryphon-flesh, and finds new friends and enemies.

I liked Felix from the start and really enjoyed the mystery. Felix seems a good investigator, one who can handle himself among both upper and lower social levels with equal ease. As an investigator, not only can Felix weave small magicks, but everything about how he investigates is different because of the culture and his place in it. He has different resources available than a modern detective does, magick notwithstanding. The pace of the story was fast, and kept my attention. I found this story to be a nice blend of fantasy and mystery elements.

All of the cast members, from Felix to Zymaxis, were interesting and engaging. If you enjoy blends of fantasy and mystery, if you enjoy pseudo-historical fiction or historical mysteries, be sure to check out Mehr’s Murder In Absentia. Set in a land/culture resembling Rome in all its glory and shame, a world with magick in it, Felix’s world is one well worth diving into. A world just a few planes over from ours, if you subscribe to the theoretical physics multiverse theory. I do! I look forward to seeing Mehr grow as a writer, and the chance to walk the streets of Egretia again.