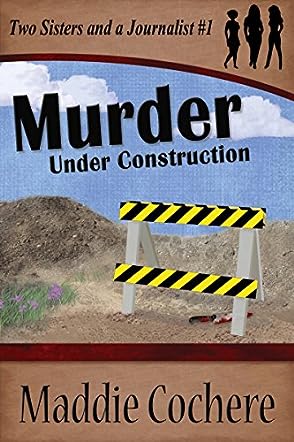 Working as a receptionist at a mortgage firm means a steady pay check, but the work is tedious and there is little chance of finding any dead bodies in the office, at least so far, and Jo Ravens is okay with that, sort of. After all, she's already found four dead bodies in the little town of Buxley, or is it five now? Jo has a knack for being in the wrong place at the wrong time in her wanderings around town, yet with too many years of watching all the hit crime shows on TV as education, she is intent on solving the crimes that the limited Buxley police force cannot. In Murder Under Construction by Maddie Cochere, Jo is ably assisted by her sister Pepper and best friend Jackie, a top-notch journalist. As the bodies accumulate, Jo decides she really should concentrate on investigation full time, and forms the firm of Two Sisters and a Journalist, though she should probably think of getting licensed first; but the bodies can’t wait.

Maddie Cochere’s Murder Under Construction is a hilarious ride through the life of Jo Raven as she splits her time between being a receptionist in a dead-end job, a super cool aunt to her sister’s kids, trying to lose weight, as long as it doesn't conflict with the ribs from the hole-in-the-wall bar Smitty’s, and dealing with the dead bodies that seem to seek her out, even in her dreams. Cochere’s characters are delightful, and instead of the hard-boiled detectives in so many of the genre, Jo is one of us, suffering from all the trials and tribulations, not to mention occasional embarrassments, of life. Too short by far, but as with anything fun, Murder Under Construction leaves you thirsting for more and I, for one, will be watching for the next adventure. Well done, Ms. Cochere.