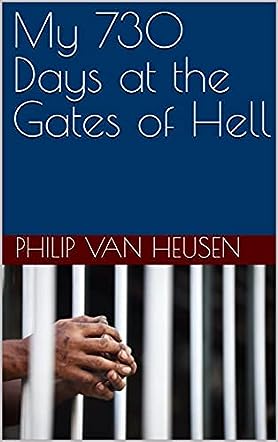 Philip van Heusen was an active minister of the Gospel of Jesus Christ for over 40 years. In 2017, right before Christmas, he was arrested on a false accusation. The legal system failed him and he ended up spending two years in prison. Prison is not fit for any humans much less for someone who grew up in a Christian environment and spent his time with Christians. There were many strange things that happened in prison. He had never heard that type of language or the type of talk that goes on in prison. He had never had anyone offer him illegal drugs until he was in prison.
Read this book and learn what life in prison is life from one who has been there, done that, and didn't even get a tee shirt.

Despite the challenges that we experience in life, especially as believers, we must understand that it's all part of the plan. I enjoyed reading Philip's journey because he found out a lot about himself and others. He discovered that as a minister who struggled with a porn addiction, he was not alone and that other ministers struggled. As I continued to read My 730 Days at the Gates of Hell, I began to recall and reflect on Jeremiah 29:11: "For I know the plans I have for you, declares the Lord, plans to prosper you, and not to harm you, plans to give you hope, and a future." How this future continues, no one knows, like In Chapter 20, "Out of the Prison but Not Free," the life of a prisoner doesn't end once they walk out of those prison doors. More needs to be done as they work to secure a fulfilling future. The prison system is antiquated and needs to be overhauled, while prisoners need to be rehabilitated with the ability to be gainfully employed and receive credentials in the volunteer roles that they held while in prison, from working with non-profit organizations to a firefighter. Highly recommended.