My First Ten Days in Heaven 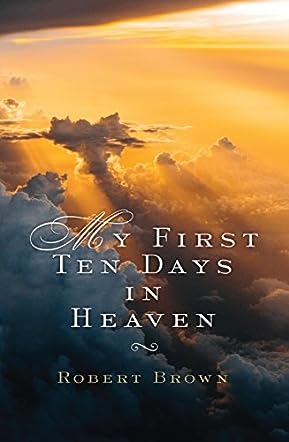 Mike was not expecting to die, let alone wake up in Heaven. As a confirmed atheist, he was convinced that when his life ended that would be it. But here he was in a very nice apartment with a well-stocked fridge, all mod cons, and a pleasant fellow called Pete who would be helping him through his transition. Pete explains that it will take a week or two for Mike to acclimatize. Robert Brown’s My First Ten Days in Heaven goes on to describe Mike's astounding experiences during this time. Mike begins by taking a long walk to get his thoughts in order, hiking a favourite trail which is exactly as he knew it when alive; he tries to come to terms with his new circumstances, to fathom how he will deal with eternity. How can anyone exist for eternity without becoming bored; will there be any sense of purpose in his new existence, any sense of achievement?

In order to explore the fabric and mechanics of his new world, he spends each day exploring various aspects of Heaven, starting with a long conversation with Albert Einstein during which they explore universal constants and the nature of Time. Throughout these experiences though, Mike is beset with doubts and fears. Fantastic as Heaven seems, he remains unconvinced. He doubts that he will be able to find meaning or purpose in an eternal life where anything he wants can be provided at the speed of thought. Pete assures him that it is within his control to die if he really wants to, to simply cease to exist, just as he was expecting when he died the first time. The option is there, but can Mike find reason enough to carry on with an eternal life in Heaven?

When his characters died (as they very often did) the late great Terry Pratchett would have them met by Death, a traditional, skeletal figure sporting a scythe and dressed in a black cowl. When the unfortunate deceased asked what would happen next, Death would answer ‘whatever you expect to happen.’ It seems to me that in My First Ten Days in Heaven, Robert Brown has taken the idea one step further. A fairly common concept in literature is that Heaven is whatever you think it might be, and I suppose one of the functions of organized religion may be to prepare one for what is to come. Robert Brown has taken on a complex exercise and, using a mixture of philosophical thought and current scientific understanding, has succeeded in deftly tackling some thorny issues. The book is well written, lucid and thought provoking, and although it often had me staring into the distance while I tried to assimilate some of the concepts, I found it illuminating and thoroughly enjoyable. I do not hesitate to recommend this book.