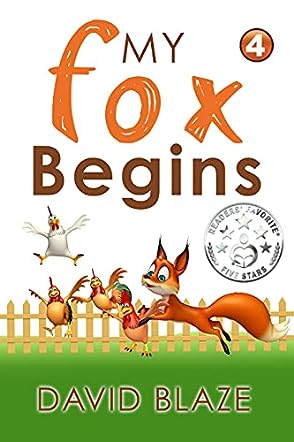 Timothy David and his son Zander Blaze live in Orlando, Florida with their crazy dog, Sapphire, magic hamster, Black, and Blaze's awesome Mom! Timothy David loves to watch funny movies and eat pizza rolls! Zander Blaze loves to play with Hot Wheels and feast on chicken nuggets! Together, as David Blaze, they share lots of laughs and have lots of fun.

Little Fox is different from all the other young foxes. For one thing, he can stand on his hind legs. In fact, he prefers walking on just his hind legs. And, he can talk to and understand humans, as well as other animals. His mother knows Little Fox is special, but his dad is worried that his differences will make him an easy target, not just for bullying from other foxes, but from human hunters, too. Little Fox’s first friend is Stinky, a skunk who can’t spray. Stinky understands Little Fox’s dilemma and puts it into perspective. “My mom says it’s okay to be different. I don’t have to be like the other skunks.” Rita, his first human friend, understands too. Instead of shooting Little Fox when he’s sent by his father to raid the chicken coop, she talks to him.

Sometimes it’s very difficult to be different. Others make fun of you and often avoid you. And there are times when you feel as if you don’t have a friend in the world. That is, until you find someone else who is different too. David Blaze’s picture book story, My Fox Begins, explores the difficulties of being different. This is a great learning story for young readers, not only to accept themselves for their differences, but also to accept others for their differences. There are a lot of powerful messages in this little story. As the plot develops and danger changes everything for Little Fox, the reader feels a compassionate connection to Little Fox as he struggles to survive, differences and all.

My Fox Begins is a children’s book about social issues written by David Blaze. Little Fox wasn’t exactly like the other fox kits in the woods. He had blue eyes and walked most naturally on two legs instead of four. When he tried to play with them, they told him he was a freak and made fun of him. That rejection confused Little Fox and made him sad. Then he heard his mama calling him from their den. He got scolded for having gone so far into the forest, and he told his parents about the other kits being mean. Little Fox didn’t understand why they said he walked like a human. What was a human anyway? His mom and dad decided that it was time for Little Fox to learn more about who he was. The next morning, his dad took Little Fox on a long trip. They stopped, finally, at a long silvery fence. Beyond it was a little box-like structure. His dad said it was a chicken coop. Little Fox started to salivate at the idea of a chicken dinner, but his world would soon be expanding in a very different way when he saw his first human. Her name was Rita, and while she was much bigger than him or his dad, she walked on two legs -- just like him.

David Blaze’s children’s fable about social issues, My Fox Begins, gives readers of the author’s My Fox series a welcome introduction to that amazing blue-eyed fox and his family, and shares the story of how he ended up meeting Jonah and becoming his best friend. I’m a big fan of the series, even if I’m not in the age-targeted audience, and I particularly enjoyed getting to meet Stinky, the blue-eyed skunk kit, Little Fox’s parents and Rita. Rita seems especially important in helping Little Fox understand that he can communicate with others, and that he is not different from everyone else. Blaze’s plot is suspenseful, and his characters are well-defined. The illustrations are brilliantly colored and work quite well with the story. My Fox Begins is most highly recommended.

I love all of David Blaze's books
They were awesome.
I loved them all