One Gone, More Before Long 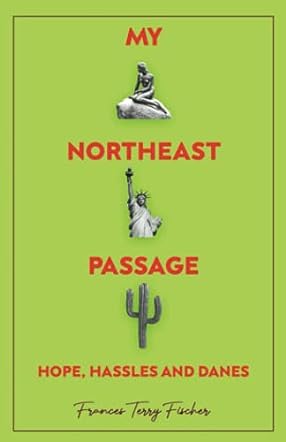 My Northeast Passage: Hope, Hassles, and Danes by Frances Terry Fischer introduces a devastated Frances, who had celebrated her 24th birthday the day before, shattered by the news that Jerry, her husband, has died in a senseless tragic accident, which occurred during a training exercise at the Naval Academy. It had been sanctioned by a negligent casualty officer who tried to shift the blame. She feels overwhelmed with grief, lost and alone. Seeking refuge, she flees to Tucson, Arizona, with her fifteen-month-old son Mike, and is smothered by the comfort and good intentions of her parents. Attempting a semblance of normality and in a bid to save her sanity, she decides to reclaim her independence by moving into a trailer park with the trailer she inherited from her late husband’s naval academy. She then continues her studies in pursuit of her master’s degree in English and American literature and has the opportunity to visit Ireland with a group of fellow students. Bitten by the travel bug and believing it is written in the stars, and smitten with what she believes is a worthy Danish Viking, she makes the decision to move with him to the land of his birth. Frances and her son Mike will have many escapades, some sweet, some sour. They will travel far and wide, broaden their horizons, learn new languages and customs, enlarge their circle of influence, and consistently embrace new challenges, with enthusiasm, zany humor, and grit.

My Northeast Passage by Frances Terry Fischer is a tale about Frances’s life which is in constant motion, told by the author in a voice that is warm, engaging, and full of wit. It is about a life well-lived, a life marked by tragedy, trials, temptations, squabbles, passions, and compromises told with honesty and peppered with clever and sarcastic humor. The author entertains the reader with epigrammatic phrases such as ‘Brain in gear before tongue in motion.’ The writer also uses idioms and expressions to introduce the reader to her state of mind and exuberant and boisterous American personality in comparison to her Danish counterparts with their lifestyles of traditions and contradictions. Through the life of Frances, her partners, and her offspring, I got to learn about Danish customs, cuisine, politics, culture, literature, was introduced to the descriptions of beautiful natural scenic views, well-known authors and poets, and had the privilege to read this wonderful and thoughtful work of literature.