Turn Your Mind Into A Money Magnet The Power of Kindness and Treats! My Son, The Killer 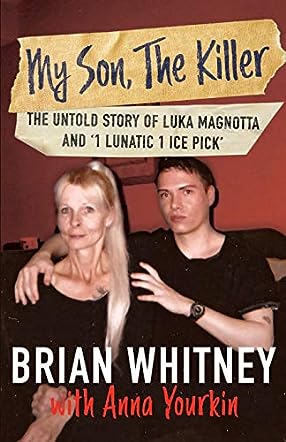 If you don’t follow Canadian news, you might not be familiar with Luka Magnotta, a homosexual who, in 2012, murdered a Chinese computer engineering student, Jun Lin, by stabbing him 37 times in the chest, 18 times in the abdomen, then decapitated him and hacked his body into 10 different parts, some of which he mailed to government offices and to schools. It is this man and his mother whom you will meet in My Son, The Killer, co-authored by Brian Whitney and Magnotta’s mom, Anna Yourkin.

In very simple, sometimes overly detailed prose by Yourkin, the primary narrator, Yourkin seems hell-bent on exonerating her son’s actions, or at the very least convincing readers Magnotta is really a lovely, kindly person and not the monster the media portrayed him to be. It would appear that Magnotta and his mother share Trump’s views on “fake news”. Well, if Magnotta isn’t a monster, but the victim of fake news, does Yourkin offer any real explanation for his vicious, vile behaviour? After all, she agrees with Magnotta’s assertion that he isn’t schizophrenic…even though his biological father was. She works hard at pointing out that, as a shy youngster, he was abused by both his father and her second husband while he was doted on and spoiled by his grandmother. She says he was called a faggot and bullied by classmates. But eventually, thanks to his good looks, he overcame that shyness, working as a model and eventually as a highly paid escort with narcissistic aspirations of movie stardom. What a tragedy that Jun Lin answered his Craigslist ad.

You have to read My Son, The Killer to understand how both Luka and his mother have concluded he really is quite sane and a very nice guy who has never shown any remorse for his actions. Today, incarcerated in a Canadian Federal Prison, he states he is very happy. Well, why not? Seems like life is good behind bars: “I’m outside the majority of the time; I play a lot of video games…we have movie nights. We all have our own TVs. I have painting class and I exercise a lot. I practice language studies.” Magnotta is outspoken on how he feels his case was mishandled by his lawyer and his mom, his greatest fan, agrees with him. Magnotta asserts: “People need to be proud of their accomplishments. Know your value and share it with everyone.” One can’t help but wonder if anyone, besides Magnotta and his mom, is proud of his accomplishments. A stomach-turning read that once again proves how truth is stranger and many times more horrible than fiction.