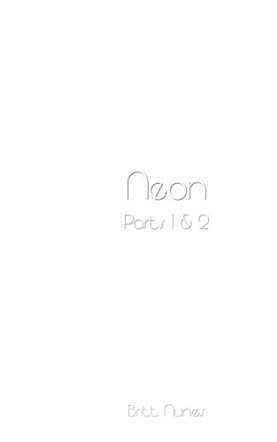 Britt Nunes never expected to be a writer. Coming from a past where she always struggled academically, to the point where she was held back in grammar school, the idea of completing a novel was utterly intangible. But falling in love with reading was what ultimately helped her excel. She now considers herself a dork with an overactive imagination. Being that she is addicted to rich words, suspenseful stories, a touch of romance, and massive amounts of coffee, becoming a writer not just became possible, but enviable. Britt writes for young adults.

Neon (The Galaxy Guard Archives, #1) by Britt Nunes starts with a disclaimer that this is not an epic story. It might be a crazy story, but it isn't some epic tale like the ones we have come to expect. Our main character, Orion, is introduced by her dancing Aunt Clara, who is an interesting side character, and her cousin Billy, who she catches climbing into his room through the window after scaling the side of the house. The story quickly takes a strange turn as she meets up with Jeronimo, a student who went missing six months earlier from Ginger Isle High. Things start going crazy and Jeronimo is the only one who truly believes that Orion isn't losing her mind.

The story is creative and provocative, and it starts off with a really strong bang, grabbing the reader's attention and refusing to let go. I liked Orion, and I liked Billy as well, and I could even see the varying levels of Jeronimo and who he was before the six-month period he was missing and after. As the story progressed and I found out what was causing all of the problems, I started to see why the character was having such a hard time understanding if she was truly crazy or if this was actually happening. It has a few fun and interesting twists along the way that are sure to delight readers interested in science fiction stories targeted toward a younger audience. Neon (The Galaxy Guard Archives, #1) by Britt Nunes is a real winner and well worth the read.