by Lucy May Lennox The Color of Greed 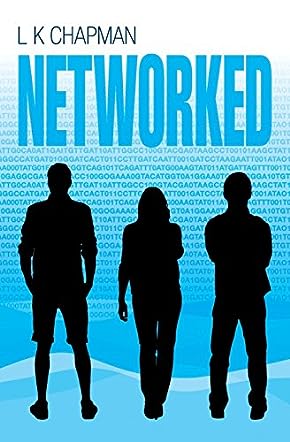 Louise Katherine Chapman was born in Somerset, UK, in 1986. She studied Psychology at the University of Southampton before working as a psychologist designing personality questionnaires for a consultancy company.

She published her first book, Networked, in 2014- a science-fiction novel that challenges what it means to have a human life; calling into question our ideas about happiness, mortality and the meaningfulness of our existence. In the story, LK Chapman draws on her own experiences of depression- and in particular how it affects a romantic relationship- to inspire the fictional account of depression that runs through the book. Her second novel, psychological thriller Anything for Him was published in 2016, and follows the attempt of a deeply troubled man to get revenge on the friend he claims stole his first girlfriend and ruined his life.

LK Chapman lives in Hampshire, with her husband and young family.

The relationship between Nick, Lily and Dan is one that has been long in the making. It is one that they are incapable of changing and that they don’t actually want to change. But one night, while they are working on their latest video game design, everything changes. Affrayed was supposed to be their big ticket to fame and fortune, but when their design is stolen and improved they aren’t sure what to think. It’s only after they decide to take the credit and the money and publish the game that everything starts to change. Interface has claimed responsibility for the game (though only to them) and he’s making changes that they didn’t authorize. Changes to the game, and changes to them.

I was drawn into Networked by LK Chapman very quickly. There's a little bit of romance but the story is more than that. There’s so much going on that you really just can’t stop reading. You find yourself completely fascinated by everything that’s happening and by the characters. They seem so real and everything they’re going through is so realistic that it’s really amazing to read. It’s been a while since I have been this drawn into a book and wanted to read it as badly as I wanted to read this one. It’s definitely one you will be talking about with your friends. Interface is an amazing character and the way that Lily, Nick and Dan interact with him and with each other is great. I loved the descriptions, and the way the author makes you really feel like you’re right there with the characters, and how so many things are happening all at once will really amaze you.

Networked by LK Chapman caught my attention because the world of computer games, technology, and how it might be able to take control of the world fascinate me. So the plot of this novel was rather intriguing to me. Nick and his friend Dan have worked on a game called Affrayed for a long time, and one day they lose it all. The code disappears completely, but it returns in a better state a bit later. They are now the owners of a perfect game, and decide to publish it after some initial doubts. The game turns into a hit, and then suddenly morphs into an MMO, and people initially love it. But the game - and the creator behind the game - is more than just a game. The creator had something different than just fun in mind when he gave Dan and Nick a perfect game to release. But will Nick be able to stop what is happening?

I found Networked by LK Chapman very well written, and enjoyed most of the story very much. In the end, it sometimes became a little too focused on strange relationships, but that seemed to be necessary to move the story in a certain direction. In general, I enjoyed the idea behind the book and it does make you think about whether technology could really have such a huge influence on the human mind. You do care about the characters in the book, and you definitely want to know whether Nick will be able to resist the call of the Network - and how he will deal with the fact that his wife and best friend seem to have a completely different attitude towards the problem. It is a book that is hard to put down once you start reading it.

Networked by L.K. Chapman introduces us to Nick, someone who needs a change in his life. He is broke, always exhausted, and about to have a breakdown because he can't hold it all together anymore. Then, when it can't get much worse, the video game he has spent the last two years of his life making with his friend Dan disappears, but the shocking surprise is something else is left in its place. The game left in its place is better and finished. Nick makes the choice to release this new surprise game to help his wife Lily, but the game release doesn't fix things. The game doesn't just want to be played; it wants more from everyone.

What a surprising book! I never thought that a book mostly centered around a video game would be so rich in content and so entertaining. I have to applaud L.K. Chapman for this unique book that has a group of nice and well layered characters. I can certainly feel a connection with Nick and the struggles he is having - haven't we all been stressed out to the point of no tomorrow? I think I would have released the game too! What happens next though, wow, a game that wants to grow and has demands of the people who play it. It's amazing. This was a fast moving page turner for me and I would recommend it as a great summer read for gamers and non gamers alike. Prepare to be fully engrossed and entertained with this book.