Fall in Love with the Whispers of Your Heart Lucy and the Lake Monster

by Richard Rossi and Kelly Tabor Never Turn Your Back on the Tide

(Or, How I Married a Lying, Psychopathic Wannabe-Murderer and Kinda Lived to Tell)
by Kergan Edwards-Stout
Non-Fiction - Autobiography
376 Pages
Reviewed on 07/20/2020 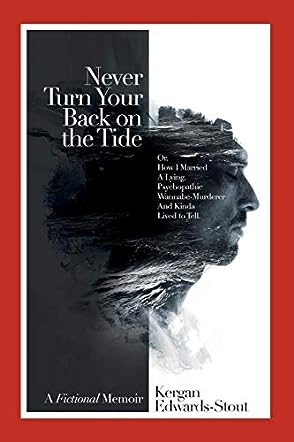 Kergan Edwards-Stout is an award-winning director, screenwriter, and author, whose new fictional memoir Never Turn Your Back on the Tide (Or, How I Married a Lying, Psychopathic Wannabe-Murderer and Kinda Lived to Tell) is a 2020 IndieReader award winner and a 2020 Next Generation Indie Book Award finalist. His debut novel, Songs for the New Depression, won a 2012 Next Generation Indie Book Award, was shortlisted for the Independent Literary Awards, was named one of the Top Books for 2012 by Out in Print. His collection, Gifts Not Yet Given, landed on multiple Best Book lists and was a finalist in the Next Generation Indie Book Awards. His greatest honor, however, was to have been named one of the Human Rights Campaign's 2011 Fathers of the Year, as his husband and children nominated him. http://kerganedwards-stout.com

French author Guy Blaise states that: “The most tolerant people that I know, both in America and in France, are gay...people in same-sex relationships care more for each other at a level that would embarrass heterosexuals.” No books I’ve read give more credibility to those statements than Never Turn Your Back on the Tide by Kergan Edwards-Stout. While it was the sub-title suggesting I’d be reading about a lying, psychopathic wannabe-murderer that caught my attention, it was the emotions experienced by the principal character, Kergan, in this disturbingly beautiful autobiography that really spoke to my humanity.

Without putting a label on it, Kergan knew at a young age that he was gay. He wasn’t unhappy about it, but as he matured, entered the showbiz world, and learned first-hand how many others in all walks of life and at all levels of their businesses and careers were just like him, he also became increasingly aware of the intolerance toward gays. He watched sadly as his closest gay friends succumbed to Aids, one of whom, Shane, became his partner for several years before dying. It was Kergan’s depiction of this particular relationship that showed how people in same-sex relationships do indeed care more for each other “at a level that would embarrass heterosexuals.”

Unfortunately, the level of caring in Kergan’s next relationship with “Eyes”, the “lying psychopath,” was strictly one-sided. It took years for Kergan to wake up to the truth and by that time, he and Eyes had adopted a son. While the years Kergan spent with, and later, without Eyes, were heartbreaking for him, what a wonderful, caring single father Kergan became to not just one, but two adopted sons who might otherwise not have had any chance of a good life. Never Turn Your Back on the Tide is a touching and eye-opening read. The style is laid-back, easy to follow; the tone is compassionate, sincere, and honest. These are the kinds of books that need to be written...the autobiographies, the memoirs...if ever the world is to better understand and become more tolerant of the differences between each and every one of us. Thanks for writing this wonderful book, Kergan Edwards-Stout.