The Power and Pain of Nursing New Kids on the Rock 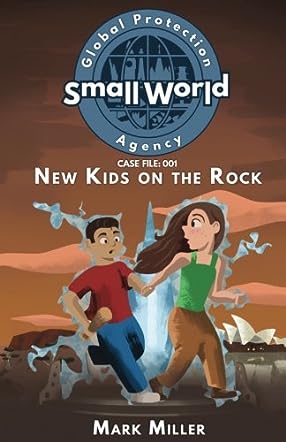 Mark currently resides in Florida with his wife and four children. He has achieved some success as a Kindle Best Seller and having one of his short stories selected as a winner in the Florida Writer's Association Short Story Collection.

Growing up in Kansas, Mark graduated from Sumner Academy of Arts and Sciences and received his Bachelor's in Film from the University of Kansas. Mark has written numerous novels, screenplays, short stories and digital series.

Many of his stories are geared for the classroom. He has explored his spirituality, writing both with his father and daughter. Inspirational stories with positive messages are his goal with everything he writes.

When fourth graders Madison and Josh are tapped on the shoulder to become members of a secret agency called the Small World Global Protection Agency in Mark Miller’s Small World Global Protection Agency: New Kids on the Rock, they had no idea what kind of adventure they are in for. After spending some time in training, they are sent on their first mission to Australia where they are met by Kim and Mick, Australian members of the agency. The Australian pair are only two of the agents that exist in every country in the world. After being transported through a teleporter to the Outback of Australia, the four of them work together to unravel a plot. Feeble Bix, manager for rock singer, Ja-Naya, plans to take over the world through the release of her CD, which would hypnotize the listeners and allow Bix to do whatever he wanted. The team has to work fast in order to spoil his plan and save the world from the evil Big Bix.

Small World Global Protection Agency: New Kids on the Rock by Mark Miller is a well written children’s story that has plenty of action and adventure to keep a kid turning pages. The story flows smoothly and stirs the imagination while unraveling a suspenseful mystery. The use of history and geography as a part of telling the story makes it educational as well. This is an excellent addition to any young reader’s library and promises to be an awesome adventure series that will keep them coming back again and again.