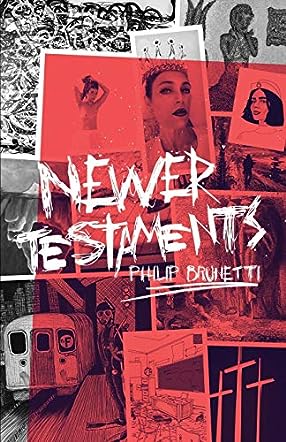 Newer Testaments by Philip Brunetti is a fascinating book that is unique in many ways. First, the reader is pulled in by a voice that speaks of many things in so little time and few words, much like the feeling one gets from reading Friedrich Nietzsche’s The Twilight of Idols. While there is no linear plot for this novel, the reader encounters a protagonist wrapped in his own world, exploring ideas and reflecting on encounters that are unusual. The image of the woman standing in a café with the toe of her shoe pointed at him and a predatory expression on her face opens the narrative. Even if the nameless protagonist is aware that unreal things must die and that there are those who will destroy him, he inadvertently finds himself paying more attention to the woman’s pointed shoe than to her face. It is a story about turning the tables, featuring a multilayered, nameless protagonist with a mysterious bond with the Jesus Girl, a character who is torn between male and female that readers can very likely identify with. Can this character unlock the secrets to the mysteries of life?

Philip Brunetti's story depicts the experience of being thrown into the gray sphere between light and darkness, between reality and fantasy, and as the protagonist navigates this world in an effort to make sense of it, interesting characters step in. These include the Jesus Girl, whom he has known as a figment and has grown up wanting to be her, John the Baptist, Macbeth, Simon, Nurse Mother, The Tree Girl, and many others. Each character is well imagined and written to fit into the symbolic nature of the narrative, and the author has the unique ability to stir the minds of readers with “what if” questions to answer. Newer Testaments is lyrical in style, bursting with symbolic language, and filled with strong imagery. The book contains strong philosophical, existential, spiritual, and human themes, and while it is cryptic in nature, it doesn’t fail in the evocation of the experience that readers have when thrust between dream and wakefulness. It is classic: a thing of rare beauty and depth.