Stepping Into The Fire 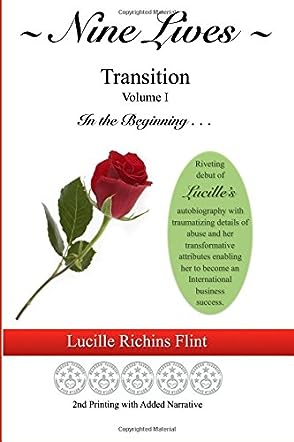 The story of Lucille Richins Flint, composed in a trilogy revealing a life of sorrow, abuse, forgiveness, love, miracles, success, and faith that conquered all through her transitional life.
Inspired twenty plus years ago from several dreams that kept returning over and over. I wrote little through those years.
In 2010, I attended a “Publicity Summit” in New York produced by Steve Harrison,(NationalPublicitySummit.com). There, I met over 100 top journalists/producers, who do stories and shows for major media. ABC's The View, CNN, Today Show, Fox News, Fox & Friends, 48 Hours, ABC's 20/20, USA Weekend, Dateline NBC, Inc., Health magazine, Entrepreneur, Family Circle, O the Oprah Magazine and many other top outlets.
Chosen as one-of-six of over 100 guests at the summit for Special Interviews with producers. I received an astounding offer for a TV show. I turned them all down, as my husband was extremely ill at the time and I wasn’t going to move to New York City.
Probably the three people who influenced me were Rick and Scott Frishman of "Author 101 University" fame, and Alex Carroll, a very successful author, and Radio Publicity Expert. They said I need to write my life story in three books. Thus the three volumes.

Nine Lives: Transition (Volume 1) ~ In The Beginning by Lucille Richins Flint is an autobiography about the life and pre-mortal existence of Lucille Richins Flint. Lucille was born to Leah Naegle and George Arthur Richins in New Mexico during the Great Depression. As a very young child, Lucille had a happy life with a loving mother and father, but that all changed when a drunken doctor overdosed Lucille’s mother. After the death of Leah, George married Lenore with the hope of providing his multiple children with a mother; this is when young Lucille’s life changed for the worse as the woman that should have loved and cared for her constantly abused her. Will Lucille be able to overcome a childhood filled with abuse to find love and forgiveness in her adult life?

Nine Lives Transition: (Volume 1) ~ In The Beginning by Lucille Richins Flint is a very well written book that took me on an emotional roller coaster ride and had me crying in sadness and laughing with joy. I have to say that I really liked the way the author kept the language her siblings used age appropriate, but provided the correct word in parentheses such as when Betty Lynn would use words like "wov" (love) and little "tither" (sister). I felt that this was how a young child of twenty-three months would actually speak and I much preferred this style of writing to that of authors who make it seem like young children can speak perfect English.

My favorite part of the book was when Lucille was a baby as I loved how the author created such a vivid picture of what life was like for her as a baby, and I enjoyed how she would share her future thoughts about aspects of her life as well. For instance, when Lucille was named, the author included the Hebrew meaning of her name and her ponderings about whether the meaning of her name played a part in her dreams and visions. Overall, I enjoyed reading this book and I was glad that that I chose to read it!

We can choose our responses to what happens to us, especially in our childhood. We can choose to reject the programming we have been given and create a path towards the kind of life we want to live. This is the message that comes across in this powerful autobiography, the first volume in a series, Nine Lives: Transition by Lucille Richins Flint. This is an inspiring story that follows the life of a young protagonist who suffered untold abuses, starting at the age of two and lasting a decade. In this book, readers will discover her inner strength, her spiritual values, and the magnanimity of her heart. Readers will also discover how she chose forgiveness as the path to inner freedom, growing up to be someone quite different from her step-mother who abused her relentlessly.

Nine Lives: Transition is so well-written to inspire and entertain readers, and the narrative voice is so unique, at times mimicking the voice of a kid. Lucille Richins Flint tells her story with honesty and a rare sense of humor, succeeding in bringing laughter to her readers and tears to their eyes. Readers will enjoy the way she develops the conflict, especially the internal conflict. This autobiography has many spiritual and real life lessons for readers and they will enjoy following the protagonist in her growth process. I also enjoyed the way the themes are developed in the story, including family, love, forgiveness, and inner freedom. This is a unique autobiography, beautifully written and featuring great prose, wonderful moments of entertainment, and passages that will inspire readers.

Nine Lives: Transition (Volume 1) ~ In The Beginning by Lucille Richins Flint is a debut work that dives into the life of author Lucille Richins Flint. She shows the reader all of the drama, moving around, and problems of life, as well as the good. A story that doesn't shy away from telling the hard truths of how devastating child abuse can be. However, it also shows that you can grow and transform and not allow terrible events to rule your life forever.

I have really been enjoying autobiographies lately and this one is in the top three of those I have read. Lucille allows you a 'warts and all' look at her life. I cannot even imagine what it would be like to suffer through 10 years of abuse as a child. So many people, including me (most likely), would have shut down when it happened. This harrowing story draws you in and keeps you riveted to each one of the pages.

What I loved most of all is the personality that comes through the pages from Lucille's writing. She has a spirit that is strong and amazing, that likes to have fun. Now that is something I can truly get behind and I did feel like I was experiencing everything right alongside the story being told. The fact is that Lucille didn't just roll over and give up because of a hard life. No, she walked through fire and came out the other side, tough as iron with a giving spirit. I am so happy to see how she made a good and happy life despite it all. I have taken away many lessons from this book and I plan on reading it again so I can take away even more.

Nine Lives is a great opening in an autobiographical series by Lucille Richins Flint, a book that explores her life and her early childhood, highly inspirational and loaded with lessons on beating early childhood abuses and finding one’s unique voice. This is the story of a woman who was abused multiple times as a child, an abuse that started when she was two years old and that lasted a decade. The reader would expect to encounter someone who is emotionally broken and lacking in self-image, but on the contrary, the protagonist turned the circumstances around, thanks to her ability to focus on things that are uplifting and her relationship with God, coupled with her willingness to move beyond her past.

Lucille Richins Flint is a great storyteller and knows how to reflect the voice of the child she once was in this autobiographical narrative. The perspective of the child comes across neatly in the writing. The writing is stellar and readers will be absorbed by the author’s ability to paint vivid pictures in the minds of readers. From the beginning of the story, the reader is already captivated by the curiosity of the young protagonist who asks incessant questions, a child with a mind that is alert and searching. But can she be forced into silence, into solitude, to put aside the curiosity that is part of her personality? It is interesting to watch her grow through the challenges into a mature, happy woman. I enjoyed the masterful way the themes of abuse, family and friendship are woven into the engaging narrative. Nine Lives is a riveting story with great potential to entertain readers.

Nine Lives: Transition – In the Beginning is volume 1 of Lucille Richins Flint’s autobiography. This is a story of transitional life, a life in which Lucille overcame a 10-year period of child abuse that started when she was just two years old. A story of how Lucille transitioned from her harsh beginnings as a child into a successful happy adult, a businesswoman, a wife, and a mother. She tells us how it was to live in the 1930’s, 40’s and 50’s in the South, about her mother’s death when she was less than a year old. She tells us of how life changed for her when her stepmother came into her life. Lucille tells the frank, sometimes harrowing, sometimes humorous story of her beginnings, a beginning that no child should ever have to experience. This is the story of Lucille’s transition, her ability to be different and to win against all the odds.

Nine Lives: Transition (Volume 1) In the Beginning by Lucille Richins Flint is a gripping story. It is written in beautiful, descriptive prose and in an easy to read manner. I found myself sinking into the story, a story that is full of incredible details. I admire Lucille for her frankness, for her decision not to let what happened to her bring her down. She is an example that we should all strive to learn from, the embodiment of all that is good and worthwhile. This is a story that had me laughing, crying, gasping in surprise and flinching – this is such a descriptive story that you will live it while she tells it, you will feel and experience everything, and you will get off this roller-coaster ride of emotion a better person. Amazing story, and I would love to read the next one.