These Walls Between Us 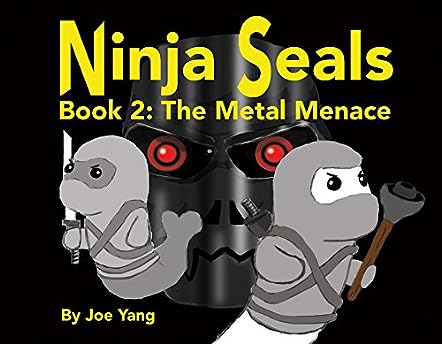 Joe Yang is a children’s book author, web cartoonist, and graphic novelist. At the age of 2, while on a trip to Vancouver, Canada, Joe first encountered seals and seal lions. Oddly mesmerized (according to his father), Joe stared at them for a long time. And since then, he's been a huge fan of those silly creatures.

With a passion for art and storytelling, it is no surprise that those flippered animals often find their way into the majority of Joe's work.

As an author, Joe’s goal is to encourage children, particularly young boys, to develop an interest in reading.

Joe graduated from Ithaca College in Ithaca, NY with a Bachelor’s degree in Cinema/Photography and Spanish. He went on to complete a Masters Degree in Digital Imaging and Design from New York University.

He is also a full-time Argentine Tango instructor, and regularly teaches at tango festivals throughout the US. In a partnership with occupational therapy researchers at the University of Wisconsin, Madison, Joe also teaches tango to patients in treatment for Parkinson’s Disease.

Ninja Seals, Book 2: The Metal Menace is an action-packed graphic novel for children, written and illustrated by Joe Yang. Alx and his cousin, Scooter, are seals, but they’re not your ordinary kind of seals -- they’re Ninja Seals. They dress up in their ninja costumes at night and fly around looking for seals who need assistance or criminals to apprehend. If any seal is in danger of becoming a tasty snack for a great white shark, these flying cousins will be there to airlift the endangered seal to safety. Their jetpacks let them go just about anywhere, and they have a full assortment of ninja gear for doing battle. But they don’t always become ninjas at night. One of their special projects is building a rocket, which they’re working on in Alx’s brother’s workshop. Cyrus is usually pretty picky about who he lets into his workshop, so the two seals are feeling very excited. They’re also ignoring Alx’s phone -- which keeps on ringing. Suddenly, they hear banging and bashing on the workshop’s door, which eventually gives way under the onslaught. As the door crashes down, Alx and Scooter are stunned to see a cyborg sea lion, and he’s glaring at them with angry red eyes.

Joe Yang’s action graphic novel for children, Ninja Seals, Book 2: The Metal Menace, is a fast-paced, exciting and funny book about two exceptionally resourceful seals and the crazed cyborg sea lion who breaks into Cyrus’ workshop. Don’t let the fact that this is the second book in Yang’s series stop you from settling down for a fun, action-packed frolic. I had a grand time reading it and found myself making plans to read not only book 1, Night of the Mudskipper, but also books 3 through 5 in this series. Alx and Skipper are fabulous superheroes, and their adventures are well worth a look. Yang’s illustrations are marvelous. You can see the surprise and dismay written large on the ninja seals' faces as they confront the cyborg sea lion, and feel the intensity of each combat scene as they try to survive its attack. While the perfect selection for story time, especially for kids who are tired of the same old nursery rhymes and picture books, The Metal Menace is ideal for new readers as the vocabulary is relatively simple and works perfectly with the graphic images. Ninja Seals, Book 2: The Metal Menace is most highly recommended.