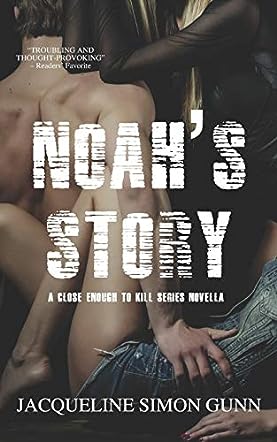 Noah's Story: A Close Enough to Kill Series Novella is a psychological thriller written by Jacqueline Simon Gunn. While Gunn’s other books in this series show Noah Donovan from the perspective of his long-time friend and fiancee, Yvonne, and his girlfriend, Kadee, Noah’s Story explores the relationship of Noah and his controlling mother, Belle Donovan. Once upon a time, Noah had a mother and a father. His doctor father worked long hours and the mother and son were often at home together. Their relationship was a close one, too close for the young boy who was alternately thrilled, confused and ashamed by the physical responses his mother’s closeness and inappropriate nudity roused in him. Noah’s father died, he was told, of a heart attack, but things his mother hinted at and later said made him wonder if he were not to blame for his father’s death. Even now with Noah at the age of forty and having achieved the status of a respected Manhattan physician, his mother was still controlling his life. She sought to determine who he would date and was vicious about his own choices of companions. Belle lived through him and would never let him forget that Mother was watching everything he did. Noah was not a good man, and he did some things that were very hurtful to Kadee and Yvonne, but his mind had been warped by a lifetime of abuse.

Jacqueline Simon Gunn’s psychological thriller, Noah's Story: A Close Enough to Kill Series Novella, is a troubling and thought-provoking addition to her series, which gives the reader the perspective of Noah Donovan, whose abusive treatment of Kadee and infidelity to Yvonne is covered so brilliantly in her other books. I was fascinated by Gunn’s Close Enough to Kill novels and wondered how Gunn could cast Noah in a sympathetic light, but she manages to do just that in Noah’s Story, and she does it brilliantly. Belle Donovan assumes truly terrifying status in this novella, which shows just how abusive and controlling a person she is, and, yes, I found myself understanding why and how Noah became the warped abuser he was in the series. Noah’s Story can be read on its own, but I would strongly recommend reading the other books in this series. Gunn’s own experience as a practicing clinical psychologist and author gives such credibility and authenticity to her stories, and her familiarity with Manhattan brings the Upper East Side setting to life quite well. Noah's Story: A Close Enough to Kill Series Novella is most highly recommended.

Noah’s Story by Jacqueline Simon Gunn is both quite annoying and utterly enthralling. How can that be? Well, the protagonist, Noah Donovan, a handsome 40-year-old doctor, is so psychologically messed up that his indecision about how to cope with the women in his life tests readers’ patience. But we can’t stop ourselves from reading, from following Noah’s thinking, and from trying to understand why he is the way he is. We wish we could give him a kick in the butt to make a decision about the three women driving him to distraction, the worst of whom is his mother, Belle. This controlling, narcissistic woman, with an unnatural and unforgivable love of her son, is at the root of Noah’s problems.

How has “Mother” so complicated his mind to the extent that he’s terrified of committing to Yvonne, a busy therapist he’s loved for 13 years? And why, when he loves Yvonne…or thinks he does…does he let himself become passionately involved with the sensuous and intelligent Kadee? And what’s Mother’s problem with both of them and why does she keep trying to hook him up with unattractive Lillian? Why does Noah simultaneously love and hate all the women in his life? Noah is so conflicted that he’s worse than a six-year-old child trying to choose between an assortment of lollipops. The reason for that becomes increasingly obvious as we read Noah’s Story and realize he is indeed, still a very hurt, and confused 6-year-old child.

Noah’s Story is actually a very brave and important book by Jacqueline Simon Gunn, a Manhattan based clinical psychologist. Though this book is a fiction thriller, it is based on what Gunn knows about male abuse victims. They suffer every bit as much as female victims do, especially when the abuser is a parent. Unfortunately, male victims are often even more reticent than females about revealing such an ugly secret about their upbringing, as is Noah in this book. Like Noah, they fight the truth with everything they have inside them, hating themselves for not being able to resolve the never-ending conflict in their minds or find the courage to confront their abuser. Like too many victims, they suffer in silence and often mess up their lives; outwardly successful, but inwardly an inadequate failure of a human being. Jacqueline Simon Gunn has written several books. I recall reviewing her book What He Didn’t See some time ago. It too was an enthralling, realistic and disturbing read on many levels. She has also authored a series called Close Enough to Kill. Lots more great reading ahead for fans of realistic, psychological thriller fiction by Jacqueline Simon Gunn.

Belle Donovan takes the definition of a domineering and manipulative mother to a new level! She tries to control everything in her son’s life, including who he should date and marry. Finally, it seems Noah Donovan, MD, is making his own decisions. One morning at the local coffee shop, he meets the stunning Kadee Carlisle, who is a doctoral student in the field of criminality. The physical attraction is intense, and soon a romantic relationship begins. At the same time, his best friend, Yvonne Tracy, starts to hint at the possibility of redefining their long-term relationship. Thirteen years earlier, Noah and she were a couple, but his betrayal hurt her deeply; however, eventually a friendship was renewed. She married and divorced another doctor – but could she ever trust Noah again? Belle, however, continues to be a dynamic force in Noah’s life, adding an intriguing twist to the fictional work, Noah’s Story: Close Enough to Kill Series Novella by Jacqueline Simon Gunn.

The author develops a very interesting story line as Noah juggles a busy medical practice, as well as all the women in his life. The story is fast-paced and the writing is concise. The dialogue between the characters is realistic. Author Jacqueline Simon Gunn presents a fascinating study of enmeshed relationships in Noah’s Story. She has the right combination of the history between Belle and Noah, his current struggles in establishing his independence, making positive decisions regarding relationships, two complicated romantic partners ... add a final, unforeseen twist-and-turn for an exciting read. It is a great way to spend a summer afternoon.