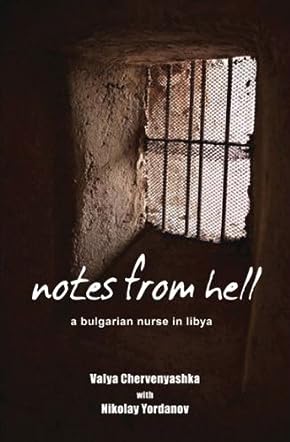 Nikolay Yordanov was born in Varna, Bulgaria. He is television, documentary and film screenwriter and creative producer, and lecturer in National Academy of Theatre and Film Arts in Bulgaria. His first book, the non-fiction biography "Notes from Hell", collected rave reviews. In 2020 Yordanov published his first fiction novel, "Don't Tell Mama".

The horrifying story of Valya Chervenyashka is one that you will not soon forget. Notes From Hell by Nikolay Yordanov and Valya Chervenyashka relates the story of the Bulgarian nurse who was kidnapped from the El Fatih Hospital, Benghazi, Libya in 1999, blindfolded, gagged and unaware what was taking place. Through the cruelest means of torture known to man, the Libyan police were attempting to force her and 6 fellow prisoners to confess to their knowledge of a alleged plot to infect Libyan children at the hospital with AIDS. Her abuse and the abuse of the others held with her are graphically chronicled to the readers’ horror. The Kangaroo Court and political maneuvering is also depicted from the viewpoint of one of the seven being held. With three death sentences on their heads, they eventually made it to freedom, but the entire affair was in doubt up until the last hour.

It is impossible to walk away from Notes From Hell without a combination of feelings; the first of elation that she and her fellow accused survived, the second that the horror occurred in the first place. Nikolay Yordanov and Valya Chervenyashka put you there; something that stirs up a great deal of dread. Even the small victories that she and the others experienced do not allow you to relax because you are already anticipating the next deception. A horrific story well told, Notes From Hell will stir every emotion you have within you. You won’t walk away and forget this book for a very long time, if ever.