by Charles B. Carson 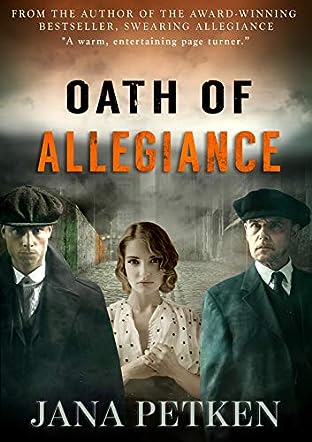 Oath of Allegiance by Jana Petken is the second book in the Swearing Allegiance saga that covers the adventures of the Irish Carmody family, through World War I and its bloody aftermath as Ireland seeks independence from Great Britain. Danny Carmody, forced to fight in the war for the British despite his clear hatred for the oppressors of his homeland, is changed forever by the blood, carnage, and destruction he witnesses on the Somme and other battlefields. For Danny, though, there is always the love of his life, Welsh wife, Anna, waiting for him back in England and praying for his survival. It is this love that sees Danny survive the tumultuous hell that is the battlefield and return to pick up the threads of his life. For his doctor brother Patrick, love is not so simple a matter. Terrified of the sea after being a survivor of the sinking of HMS Brittanic, Patrick is happy to have spent the last years of the war serving ashore at a small hospital on a Greek island. Sister Jenny has survived the horrific injuries of a Zeppelin attack on London and has married the rich, powerful, and titled heir to a massive Irish estate. As if the horror of the war was not enough for the Carmody family, they must now face the scourge of the post-war years, the infamous “Spanish Flu.” Watching over the siblings and guiding them when necessary is the loving, caring hand of the sometimes acerbic but always wise grandmother, Minnie. In this setting, the Carmodys set out for their beloved Ireland and the battle for independence between the Sinn Fein, their IRA soldiers, and the accursed British Black and Tans, not to mention the local RIC (Royal Irish Constabulary).

Jana Petken is an author I follow and, having read the first book in this series, I eagerly jumped at the opportunity to read Oath of Allegiance. The characters Petken puts on paper are real, compelling, and demand a reader’s attention. Danny was everything you would expect from an Irish rebel; brash, brave, and compelled by love of country to fight for their freedom. For me, however, the most outstanding character was Patrick and his conflict between his love for country, his deep love of his family, his commitment to medicine and helping his fellow man, his abhorrence of violence, and of course the love of his heart. This ongoing conflict was the highlight of the story for me. Petken has a style that just compels reading and her well-constructed, twisting plots make for an incredibly satisfying read that is impossible to put down. This author is a true developer of characters and that’s what makes her stories so satisfying for a reader. We fall in love with each of the Carmodys and ride along with them on this roller-coaster of emotions and patriotism. Although the author has signaled this is the concluding chapter in the Carmody saga, I couldn’t help but note she has left a small door open for the next period of Irish history, should she choose to do so and I hope she does. The Carmodys are like family now and I want more of them. Oath of Allegiance is a powerful, sweeping tale of love, loss, and country that will have everyone who reads it caught up in its grandeur and feelings of national pride, whether you are Irish or not. I can’t recommend this book highly enough.

I’ve become an avid reader of Jana Petken’s historical novels. Like the German Half Blood trilogy, this two part series evokes the time and places wherein these characters she has created dwell.

I’m English, but reading of the horrors the English did within the confines of this story along with Swearing Allegiance the first part of the two books, I was compelled to research into the accuracy of some of the events. I was disgusted to see the way my country behaved to the Irish people who want to be free as a country for most living in what is noe Eire. Yet acknowledge the majority rule situation of Northern Ireland as being different, which the book notes.
This isn’t taught in schools in England, but should be, and to think it is in the name of religion and politics to do so much harm...oh, of, course, they cause most wars, don’t they?

The character development is so superior, you feel as if you really know these people, and can see all sides of the equation and root for each one in their pursuit of what they believe is right. Loved Patrick and grandmother Minnie.

Bravo. This writer’s stories are excellent.