A Christmas Story Book for Ages 5-8, Including Christmas Facts for Kids, and Christmas Crafts for Kids
by Melinda Kinsman
Children - Grade K-3rd
40 Pages
Reviewed on 12/01/2014 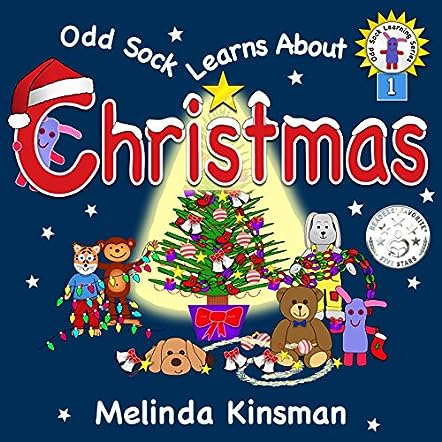 Melinda Kinsman lives on a small peninsular called The Wirral, in North West England. She loves climbing mountains and rock-climbing (both abroad, and in her local mountains of Snowdonia), and she has always had a soft-spot for cuddly toys!

As Melinda has to lie down a lot each day, due to health issues, she spends most of that time using her iPad to write and illustrate her books. (Drawing can be especially challenging, as she needs to keep the iPad steady by balancing it with one leg up in the air - much to the amusement of her family!)

Melinda originally wrote a book of poems for her 6 year old niece a few years ago, but never dreamt of trying to publish them, or of trying to illustrate them herself. The advent of ebooks and handheld tablets now makes self-publishing an exciting possibility for her!

Most of the cartoon gang characters are based on "real" members of Melinda's cuddly toy family. You can find out more about Melinda, the gang, and their books from their website at http://topofthewardrobegang.weebly.com

Odd Sock Learns About Christmas by Melinda Kinsman is a delightful and thematic story book for kids which touches on the usual Christmas activities in a house where kids get to read about Billy writing letters to Santa, decorating the Christmas tree, playing in the snow, hanging his Christmas stocking and learning lines for his Christmas play. Billy tells Odd Sock that Santa Claus gives gifts only to human children. Odd Sock waits eagerly for Billy to come from school and learns new things from him. Written from the viewpoint of Odd Sock, this beautiful story revolves around the theme of Christmas, friendship and giving.

It's an absolutely wonderful book for the season. The pictures give the book movement and breathe life into the characters. The borders of the pages and the colors in the book go with the Christmas shades of red and green. The activities and traditions focused on in the story through the eyes of Odd Sock make it an endearing read. This heartwarming book will make an ideal bedtime story book and is also perfect for read aloud sessions in classrooms. All the characters are lovable and Odd Sock, part of the 'Top of the Wardrobe Gang,' and Billy will keep children entertained. The activities at the end of the book make it more exciting for kids. The author has captured the beauty and joy of this enchanting season through this story.