Of Black Servitude Without Slavery 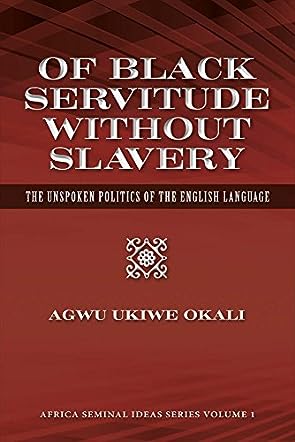 I am the Founder-Chairman of The Okali Seminal Ideas Foundation for Africa (OSIFA), a non-profit Foundation dedicated to fostering a culture of ideas within African societies, thereby ending the continent’s “ideas-dependency”. Born in Nigeria, I attended the country’s elite King’s College, Lagos and hold degrees from the London School of Economics and Political Science (LL.B) and Harvard Law School (LL.M and SJD). A long-standing member of the Connecticut (USA) State Bar, I am married and have two children.
After a stint as a corporate lawyer in the US private sector, I went on to pursue a distinguished career at the United Nations, last serving as Registrar of the International Criminal Tribunal for Rwanda, with the rank of United Nations Assistant Secretary General. Among my cherished accomplishments in UN service was my pioneering restitutive/restorative justice idea that mandates integrating assistance to victims into the conventional “retributive” approach of punishing the culprit in criminal justice systems - an idea now adopted in the permanent International Criminal Court. I also authored the key strategy paper for the campaign to elect the first African UN Secretary-General, in 1991.
This book is about the most dangerous idea in the English language for race relations: the “blackness of bad/whiteness of good” narrative, which decrees that the bad, sad and ugly things of life shall be presented as “black” while the good, happy and beautiful are presented as “white”, creating a race-hierarchy mindset that, unfortunately, gets reinforced by everyday language.

“As goes Anglophone culture, so goes the world,” is a saying that is powerfully justified in Agwu Ukiwe Okali’s Of Black Servitude without Slavery: The Unspoken Politics of the English Language (Africa Seminal Ideas Series), a work that brilliantly illustrates how language can become the new tool to conquer and control a group of people. English, the widely spoken language, has a hold on populations and that goes way beyond linguistic implications. Language always carries the soul of its people and English, undoubtedly, is a powerful vehicle of thought, which also illustrates the Anglophone mentality and ways of interpreting reality. By embracing the English language as a tool of expression, mentalities are tilted, even altered, to reflect the English culture, psyche, prejudices, and everything in-between. But how does the use of the English language reflect on the African? Such is the question that this book answers, and it does so in surprising ways.

To underline the influence of the English language across cultures, the author evokes the “… the ubiquitous and rapidly expanding influence, especially among the young, of pop music, pop dance, pop dressing, in fact, pop culture – carried to every corner of the globe on the wings of radio, television and the Internet.” With powerful and convincing examples, the author explores how humankind and the African, in particular, becomes vulnerable to the English spell. References to compelling historical figures like Obama, W.E.B. du Bois, Booker T. Washington, and others lends great credibility and authority to Okali’s arguments. The book is a powerful statement on how the English language has slowly become, over time, the new tool of enslavement for the African. Written in clear and highly descriptive prose, Of Black Servitude without Slavery: The Unspoken Politics of the English Language will become a timely addition to works on social anthropology, culture, history, human relations, and global economy. A well-researched, well-written, and a highly captivating book that will serve as an eye-opener for many readers. It is curious that such a work is written in English, and in very beautiful English, a powerful statement in itself. This is another powerful voice that should be listened alongside colossal figures like Achebe and Soyinka.

Black Servitude Without Slavery: The Unspoken Politics of the English Language (Africa Seminal Ideas Series) speaks at length about the widespread use of the English language as a language of the world and how inherently racist ideas and the mindset of the last several centuries reflect themselves in this language - such as “black sheep,” “blacklist,” “white lie,” etc. The book also analyzes and discusses the first black presidency of Barack Obama in the US — the land of slavery — and its after effects on American mindset. In addition, the book presents a detailed discussion on race and this inherent “prejudice” in the English language that uses the words “white” and “black” in that narrow way, while tying it all together with international politics, social acceptance, criminal justice system, law, ingrained so-called “standards of beauty,” and much more.

Of Black Servitude Without Slavery is an extremely well thought out and well researched book in terms of the sheer body of historical and contemporary data across a wide spectrum of fields including social justice, race, government, international economics, politics, lawsuits based on racial discrimination, etc. The writing style is easy and flows naturally. This is a must-read book on linguistics and although a lot of the theories presented in the book hadn’t occurred to me before, after reading the book, they seem to be the most obvious thing. That just shows how ingrained this idea of black being evil and white being good is in our society and the world at large. A must-read book that I would highly recommend!

The English language is by far the world's favourite second language and as such is very influential across the globe. This same very influential language, however, has always had, embedded into its core, a notion that associates the colour black with negative situations and negative situations with the colour black. This belief system has set the platform for far reaching racial implications in terms of the way black people are regarded by society. Whether knowingly or unknowingly, intentionally or unintentionally, the use of terms like black sheep, blackmail, black spot, black book etc automatically instills the concept that black is evil, and hence white represents the opposite. In his book titled Of Black Servitude Without Slavery: The Unspoken Politics of the English Language (Africa Seminal Ideas Series), Agwu Ukiwe Okali dissects this mind set, its root causes, its effects, and how it can be overcome.

Of Black Servitude Without Slavery: The Unspoken Politics of the English Language (Africa Seminal Ideas Series) by Agwu Ukiwe Okali examines the contribution of the wording of the English language towards the 'Bad = Black = Bad' mentality, how the mentality promotes racial bias and racial stereotypes, and how this hinders the progress of the black race. Agwu Ukiwe Okali draws examples from several real life situations, making his book a practical tool and a first step in fighting this unfortunate culture. As long as we continue to allow the word black to be used to represent negative conditions, it will be hard to change society's perception towards black people - after all, they are of a colour used to describe only bad things. How are other races then going to see black people in a positive light? It is important that this unfortunate concept of “blackness of bad” is understood not just by whites or blacks alone, but rather by both so that efforts towards a positive mindset are initiated from both sides.